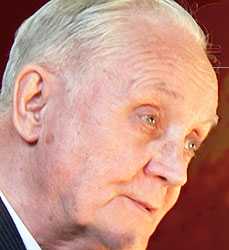 John Roy Robert Searl is a British inventor from Wantage, England. Searl claimed that between 1946 and 1956 he designed and constructed a device known as the Searl Effect Generator (SEG), variously claimed to be anti-gravity and perpetual motion device. There is no evidence that these claims are accurate, and the existence of perpetual motion machines is in principle ruled out by the first law of thermodynamics.

Searl was an apprentice employee of BR Rewinds in Grays Inn Road, London. There he gained permission to use the company's facilities and technical resources to make the device. He claims that, in December 1946, with all of the magnetic components manufactured to his specifications, he assembled the generator in his residence at 30 Crawley Road, Haringey, London, UK; the initial prototypes worked to produced electricity but it generated unexpectedly extremely high voltage along with gravitomagnetism, following which the initial devices were dramatically lost during testing due to a strong anti-gravity effect. There is no independent verification of these claims.

Searl has since claimed that he and his colleagues subsequently built over 50 versions of his ?levity disc', of various sizes, and learned how to control them. He claims that persecution by the authorities resulted in wrongful imprisonment and the destruction of most of his work, so that he has had to start all over again. His claim that in the early 1970s one of his craft flew round the world several times without being detected does nothing to enhance his credibility.

In 1991 Anders Heerfordt investigated the claims of Searl concerning the devices that Searl claimed to have shown, as well as verifying claimed witness reports. None of these claims could be verified. Furthermore, Gunnar Sandberg has never seen any of the effects described. Sandberg, as reported through Heerfordt, found a son of Searl "who had seen disks being suspended from wires, so that they could be photographed, but who hadn't seen any demonstration of anti-gravity or free energy." - Wikipedia