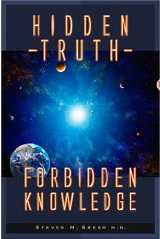 Websites: www.disclosureproject.org
In "Hidden Truth ? Forbidden Knowledge" Dr. Greer provides his own personal disclosure based on years of high-level meetings with over 450 military and government-connected insiders and whistle-blowers and briefings with senior government officials, such as former CIA Director R. James Woolsey, members of the US Senate and senior UN officials.

In addition to these disclosures, "Hidden Truth ? Forbidden Knowledge" unveils the actual contact experiences Dr. Greer has had with UFOs and Extraterrestrial Civilizations, beginning as a young child. In one of the most amazing and moving personal stories ever shared, he explains how after a prolonged near-death experience at age 17, he experienced cosmic consciousness and found the Rosetta Stone of ET contact: the power of the unbounded mind within each of us. Later this led to numerous Close Encounters of the 5th Kind: contact with ETs initiated by Dr. Greer and later by larger groups of people through the CSETI (Center for the Study of Extraterrestrial Intelligence) project.

Websites: www.disclosureproject.org
For the first time ever, over five dozen top-secret military,government, intelligence and corporate witnesses to secret projects tell their true stories which disclose the greatest covert program in world history. This explosive testimony by actual government insiders proves that UFOs are real, that some are of extraterrestrial origin and that super-secret programs have energy and propulsion technologies that will enable humanity to begin a new civilization - a civilization without pollution, without poverty - a civilization capable of traveling among the stars. This is not just a story about UFOs, ETs and secret projects: It is the story of how 50 years of human evolution have been deferred and how these secret projects contain the real solution to the world energy crisis, the environmental crisis and world poverty.