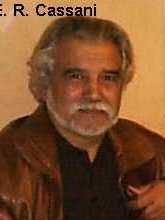 View count: 1
Buy it now
Albert Was Right - God Does Not Play Dice
by Walter Cassani

It is a common belief that the knowledge the science of physics manipulates at any given time constitutes a stable, well-defined and consistent whole. Until proven otherwise, it is considered the greatest product of the human mind up to that point in time.

It is considered a good thing that people believe that science exists as a compact and unique structure. People think that this makes it easier to diffuse the methodologies of rational thought that we know by the name of "scientific thought."

Even professors and physics teachers feel the need to believe -- or at least give the impression of believing -- in the existence and consistency of such a monolithic scientific structure. They would otherwise consider themselves at a psychological disadvantage in communicating the certainty of knowledge to their students.

Some professors, however, and among them some of the most active and interested in the status of their field are aware that the body of knowledge recognized as physics is about as consistent as a custard with a very few hard and consistent clumps floating on top. And those who engage in research alongside their teaching or do only research are certainly conscious of how changeable the structure is...