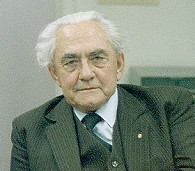 Carey is considered by most to be the modern father of the "Earth Expansion" theory.

Carey was born in New South Wales and grew up on a farm three miles from Campbelltown. The family was to move to the town centre, saving the young Carey the walk to school. An interest in physics and chemistry during high shool was to lead to selection of both subjects when he attended the University of Sydney in 1929. Mathematics was required and he was encouraged to study Geology as his fourth subject, a department still under the influence of retired Professor Edgeworth David .[1] He started a student Geology club as he became attracted to the subjects mixture of laboratory and field work; David gave the inaugural speech. Along with classmates Alan Voisey and Dorothy York, he was to earn high distinctions at the University. He also joined the Sydney University Regiment. His Masters and Honours degree were based on four papers on the Werris Creek area. He received his MSc in 1934. It was at this time that Carey read the 1924 translation of Wegener's The Origin of Continents and Oceans, the book largely responsible for introducing the concept of continental drift to English-speaking academics. He was to become a key figure in advancing this concept and plate tectonic models that followed.

After the war, Carey was a highly regarded contributor to geology and his many contributions to the emerging theories and proposals were often in advance of the accepted view. Maps and data produced from his field work in New Guinea were sought after by engineers and fellows. He backed the moving of continents proposed by Alfred Wegener and had decided on the mechanism for this when it became the accepted view. Carey's expanding earth bears many resemblances to the current model, including supercontinents dividing and going adrift, zones of new crust being generated in deep oceanic ridges, and other phenomenae of a still active crust. His theory gave the 'mechanism' for this as an expanding earth; whereas the new theory of plate tectonics accounted for it with subduction.

Despite the eventual acceptance of the plate expansion and subduction paradigm over Carey's theory, he is widely regarded as making substantial contributions to the field of tectonics and considerable influence in the initial acceptance of continental drift over a static model. In 1946, he became the founding professor of geology at the University of Tasmania. He retired from this position 30 years later in 1976.

In the Australia Day Honours list of 1977, Carey was awarded the Officer of the Order of Australia for his services to the field of geology.