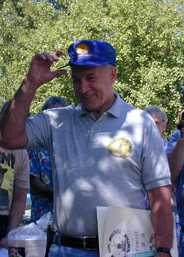 Harry L. Goldman, a teacher of science in she public schools of New York State' has published numerous articles on Nikola Tesla and is former president of the Tesla Society.

"Sir" Harry Goldman of Queensbury, NY created and diligently published the Tesla Coil Builders Association (TCBA) News during a 20 year period covering 1981 - 2001. Harry formally retired the publication with the last issue in August, 2001. This unique quarterly publication covered Nikola Tesla, the rich history of and various facets of Tesla Coiling, articles from famous and experienced coilers both past and present, and practical how-to information. Many notable amateur and professional coilers wrote articles for publication in the TCBA News. And most serious coilers have made a special effort to acquire all of the back issues for their entertainment and educational use. Harry had a seemingly endless archive of pictures and articles that he would resurrect for his subscribers.

When Harry first launched this unique publication, PC's had yet to be invented, there were no Bulletin Boards, email only existed on mainframes and minicomputer systems, and an encompassing World Wide Web was utterly inconceivable. Harry's TCBA News helped organize and unite folks who shared a common passion for Tesla and Tesla Coiling from all over the world. Harry's extensive library of articles, historical pictures, and his network of pioneering coilers provided unique insight into the varied and rich history of coiling. This was especially valuable to all of us "newbies"! He personally knew most of the famous Hollywood HV special effects folks who had provided the sparks and arcs for the horror movies many of us remember from childhood. The TCBA News opened new pathways of communication to other Coilers around the world. And, as we all know, Tesla Coilers are some of the best folks you'd ever want to meet!

At the 2001 Rochester Teslathon, Harry was formally recognized for his invaluable service to the Tesla Coiling community by appreciative coilers from all over the world. In addition to a "Telsa Coil" commemorative cake, a significant number of coilers contributed short video segments recognizing Harry. These were then combined to create a 2 hour videotape thanks to the hard work (and persistence!) of Tony DeAngelis. It is a moving and fitting tribute to Harry!

Harry, thanks for creating and publishing the TCBA News - it will be sorely missed! We look forward to hearing about your most recent coiling activities and to seeing you and your lovely wife, Ruth, at many future Teslathons! - http://205.243.100.155/frames/goldman.html