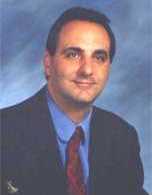 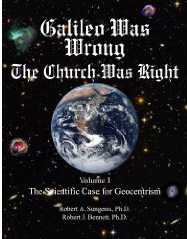 View count: 1
Galileo Was Wrong: The Church Was Right, Volume I, The Scientific Case for Geocentrism
by Robert A. Sungenis, Robert J. Bennett

A truly magnificent work. There exists no better exposition of the history and science of geocentrism. Very highly recommended and a must for all those interested in the issues surrounding geocentrism today. The animations of the CD are excellent. They illustrate the daily and yearly motions of the sun and planets about the earth, the seasons, retrograde motion, and parallax in a uniform way. The authors have done a very admirable job all around. -- Dr. Gerardus Bouw, Author of Geocentricity

In Galileo Was Wrong, Robert Sungenis and Robert Bennett have provided an excellent synopsis of a field of science that most people today have probably not even heard about. It is not a regurgitation of some ancient, debunked theory. Neither is this a lightweight paperback, in the vein of so many publications by scientists who have lost the dividing line between science and science fiction. Rather, Galileo Was Wrong is a work of monumental proportion which ranks, in my opinion, on a par with the meticulous observations of the Danish astronomer, Tycho Brahe, and the tireless efforts of Walter van der Kamp who almost single-handedly raised geocentrism from the ashes in the 1970s and 80s. Neville Thomas Jones, Ph.D. Physics Imperial College, London -- Dr. Neville Jones, Imperial College, London

In their new book, Sungenis and Bennett take no prisoners. They look all of the anomalies in the current cosmological system in the face without fear and come up with conclusions that will startle the followers of Carl Sagan out of their dogmatic slumbers. Truth to tell, Newton was turned into an idol to serve the political purposes of the Whigs, who used him to bring down the House of Bourbon across the English Channel. His cosmological system was used as a justification of the Enlightenment. Now that the Enlightenment is over, it was inevitable that the system upon which it was based should come in for the powerful critique which Sungenis and Bennett provide. Not inevitable, however, was the brilliant way they provide it. E. Michael Jones, Ph.D. Editor: Culture Wars -- Dr. E. Michael Jones, Culture Wars

Galileo Was Wrong: The Church Was Right, Volume I, The Scientific Case for Geocentrism, is a detailed and comprehensive treatise that demonstrates from the available scientific evidence that heliocentrism (the concept that the Earth rotates on its axis and revolves around the sun) is an unproven theory; and that geocentrism (the view that the Earth is in the center of the universe and does not move by either rotation or revolution) is not only supported by the scientific evidence but is admitted to be a logical and viable cosmological position by many of the world\\\'s top scientists, including Albert Einstein, Ernst Mach, Edwin Hubble, Fred Hoyle and many more.