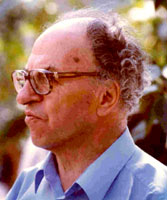 British mathematician and cosmologist, a former Master of Churchill College, Cambridge who developed the steady-state theory of the universe, which suggests that the universe has no beginning or end and is always expanding while maintaining a constant average density, with matter continuously created to form new stars and galaxies at the same rate that old ones become unobservable as a consequence of their increasing distance and velocity of recession. Bondi's steady-state theory stimulated a great deal of productive research in cosmology in the '50s but fell out of favor with the advent of the Big Bang theory. He also was chairman and chief executive of the Natural Environmental Research Council in 1980, held visiting professorships at several universities throughout the world, and won many international prizes and medals, including the Einstein gold medal, which he was only the second British scientist to win. He died in Cambridge, England on September 10, 2005.