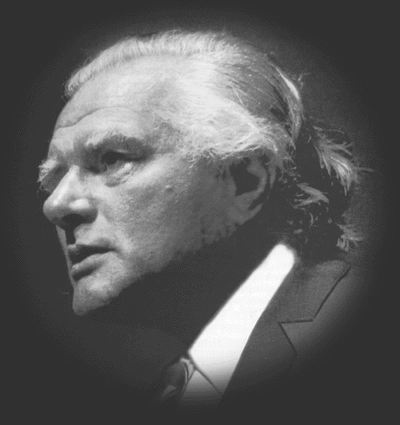 Burkhard Heim was a German theoretical physicist. He devoted a large portion of his life to the pursuit of his unified field theory, Heim theory. One of his childhood ambitions was to develop a method of space travel, which contributed to his motivation to find such a theory.

During World War II, Heim was recruited as a soldier in the air force. However, a previous essay about explosives led to his working briefly in a chemical laboratory as an explosives technician, instead. An explosion in the laboratory caused by the mishandling of unstable compounds left him with debilitating handicaps. The accident left him without hands and mostly deaf and blind when he was 19, forcing him to use Krukenburg hands. His behaviour subsequently became progressively eccentric and reclusive. Eventually, he retreated into almost total seclusion, concentrating on developing and refining his theory of everything. His disabilities and brilliance have led Illobrand von Ludwiger, the physicist and pioneer in satellite control systems, to dub him "the German Hawking". - Wikipedia

On Jan. 14, 2001, the German physicist Burkhard Heim died, 75 years old, in Northeim/Germany. In 1944 he had lost his sight, his hearing and his hands in an accident. Because of his handicap he left the MPI of Astrophysics in G?ttingen to continue his research in private. In 1957, after having discovered a new field propulsion system for space vehicles, Heim became known in the media. Then, nothing was heard about him for some ten years. Only a few physicists knew that Heim was working on a unified six-dimensional quantum field theory of matter and gravitation. Between 1977 and 1984 he published his theory and the masses of elementary particles which he had got from his mass formula and which up to now have not jet been found by any other physicist. There was hardly anyone willing to deal with such a difficult matter (written in German) since nobody wants to believe that a privately working physicist might be able to find the world formula. As the results Heim had got in particle physics proved to be correct, there won?t hardly be any choice but to start dealing with his theory, even if hesitantly, in the near future. And this will necessarely lead to a new world view of physics. -- Illobrand von Ludwiger,(Feldkirchen-Westerham, Germany, 2001 01.28.)