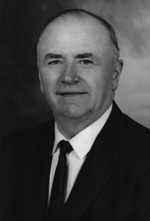 An independent scholar and philosopher, Wilfrid Boisvert was born and raised in Morinville, Alberta. Originally encouraged to study for the priesthood, Boisvert acquired a firm grounding in western philosophy, and graduated from the Edmonton Jesuit College (an associate institution of Quebec's Laval University) with a Bachelor of Arts degree. However, Boisvert abandoned plans of the priesthood, and pursued an education in agronomy at Olds School of Agriculture, where he graduated in 1926. He continued his studies at the University of Alberta and graduated with a B.Sc. in Agriculture, in 1932 at the age of 28. Supporting a wife and five children through the depression, Boisvert continued his own self-education in philosophy and physics. In 1948 he began writing what would become his life's work-- "The Principles of Reality," a soon-to-be-published philosophical treatise in which the discontinuity of motion is the cornerstone.

In 1953, Boisvert self-published his first book on the subject of discontinuity in motion, called "Theory of Instantaneous Motion." This first book provided a theoretical approach to quantum motion, but he realized that the scientific establishment would require hard empirical evidence of discrete motion. Experimenting independently and with no outside funding, Boisvert enlisted the aid of his son Adrien, and the two pursued the task of securing photographic evidence of discontinuous motion. After successfully capturing his first photographs of the quantum leap, he self-published his next book in 1973, "The Discontinuity of Motion". These photos, however, were dismissed as "light effects." He continued his experiments and in 1988 he self-published his next book, "The Mechanics of Motion", wherein he identified the duration of the atomic moment and demonstrated that the quantum leap exists as the sole displacement in all possible motion.

Boisvert suffered a debilitating stroke just prior to publishing his last book, and was forced to stop his experiments and his writing. Promotion of his life-long work, however, is being continued by his son Adrien Boisvert, and his grandson, Gordon Smith. These web pages are a result of that collaboration, and are based heavily on Wilfrid Boisvert's writings.