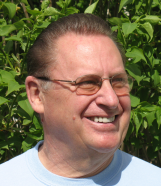 Barry Setterfield was born in Australia in 1942. He held a double major at Adelaide University in Australia of geology and physics. He was subsequently involved in a complete mineralogical survey for South Australia. He also lectured in astronomy for six years for the Astronomical Society of South Australia. His research is best known for his work compiling data regarding the speed of light and other atomic constants. The initial paper in this field was an invited white paper for Stanford Research Institute International and was published by Flinders University in Adelaide, Australia in August of 1987. Subsequent research and papers have included geological history, the Zero Point Energy, the red shift of light from distant galaxies, and plasma physics. His papers are available on his website at www.setterfield.org

He is married to Helen, and they live in Grants Pass, Oregon with their profoundly retarded 25 year old son and assorted animals. Barry is the astronomer at the New Hope Observatory in Grants Pass.