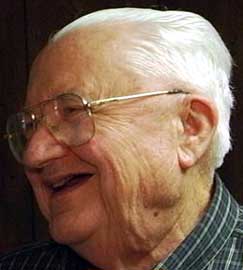 Howard Robert Johnson was born in 1919 in Pound, Virginia, and died Jan. 2, 2008 in Blacksburg, VA. He is the researcher and inventor of an all magnet motor, which modern physics deigns impossible. The devices is claimed to generate motion, either rotary or linear, from nothing but permanent magnets in rotor as well as stator, acting against each other. In his inventions (called a "Permanent Magnet Motor"), a permanent magnet armature is magnetically propelled along a guided path by interaction with the field within a flux zone limited on either side of the path by an arrangement of permanent stator magnets.

Following seven years of college and university training, Johnson worked on atomic energy projects at Oak Ridge, did magnetics research for Burroughs company, and served as scientific consultant to Lukens Steel. He has participated in the development of medical electrical products, including injection devices. For the military he invented a ceramic muffler that makes a portable motor generator silent at 50 feet; this has been in production for the past 18 years. His contributions to the motor industry include: a hysteresis brake; non-locking brake materials for anti- skid application, new methods of curing brake linings; and a method of dissolving asbestos fibers.

He has also worked on silencers for small motors, a super charger, and has perfected a 92-pole no-brush generator to go in the wheel of Lincoln automobiles as a skid control; that last item reduced the cost to one-eighth of the cost of an earlier design by utilizing metal-filled plastics for the armature and field. In all, Johnson is connected with more than 30 patents in the fields of chemistry and physics.