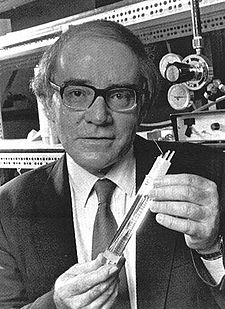 Martin Fleischmann, FRS (born March 29, 1927 in Karlovy Vary, Czechoslovakia) is an electrochemist at the University of Southampton and a Fellow of the Royal Society. He is best known for his controversial work with his colleague Stanley Pons on cold fusion using palladium in the 1980s and '90s. He was also the first observer of what was later called Surface Enhanced Raman Scattering.

On March 23, 1989 while they were researchers at the University of Utah, he and Stanley Pons announced "N-Fusion" which was quickly labeled by the press as cold fusion -- a result previously thought to be unattainable. After a short period of public acclaim, the pair were attacked widely for sloppy, unreproducible research and inaccurate results, as Fleischmann predicted they would be. Fleischmann, Pons and the researchers who replicated the effect remain convinced the effect is real, but sceptics who oppose them are convinced it is not.

In 1992, Fleischmann moved to France with Pons, to work at the IMRA laboratory (part of Technova Corporation, a subsidiary of Toyota); the laboratory closed in 1998 after exhausting a research investment of $12 million USD.  The pair parted ways in 1995, and Fleischmann returned to Southampton, where he remained as of 1999. He has recently co-authored papers with researchers from the U.S. Navy and Italian national laboratories (INFN and ENEA)