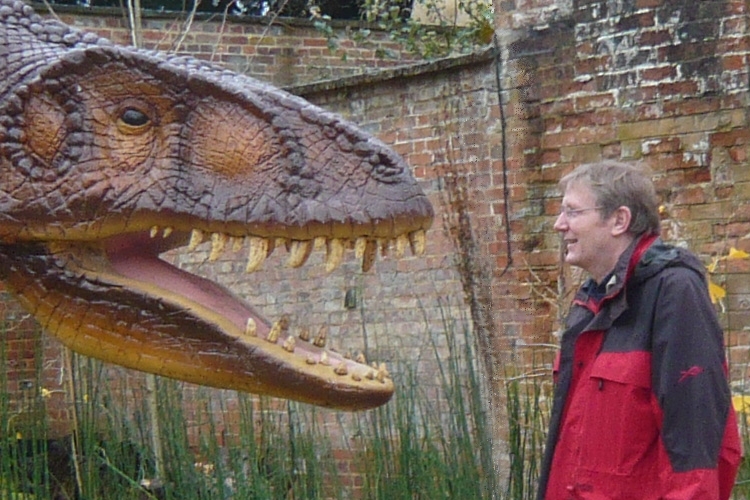 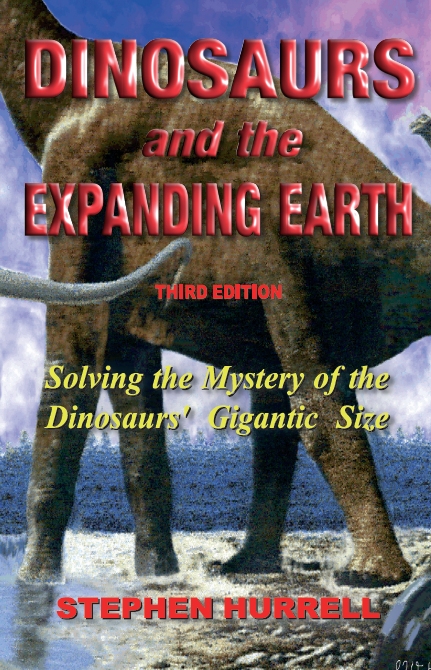 An explanation for the gigantic scale of prehistoric life

When Dinosaurs and the Expanding Earth was first published it proposed a startling idea to explain the long-standing puzzle of the dinosaurs? gigantic size. Stephen Hurrell presented scientific evidence that dinosaurs lived in a reduced gravity and this allowed them to grow to gigantic proportions. The Reduced Gravity Earth theory explains why all land-based life has shifted towards a larger scale on the ancient Earth. This includes gigantic dinosaurs, plants and insects. It is also a key piece of evidence that provides additional support for an Expanding Earth, something a few leading geologists have been suggesting for decades.

Since its initial unveiling, the Reduced Gravity Earth theory has been widely discussed and debated. Individuals from laymen to professors are now arguing that gravity was lower on the ancient Earth. You can analyse the evidence for believing the controversial Reduced Gravity Earth theory and its implications for the Expanding Earth in this third edition of Dinosaurs and the Expanding Earth.

Praise for previous editions of Dinosaurs and the Expanding Earth

?something completely different ... an original work rather than a re-presentation of existing knowledge ... well presented.?
GEOLOGY TODAY - Blackwell Science Ltd.

?Engineers (Hurrell) have shown that dinosaurs? bones could not have borne their weight ... much reduced surface gravity is essential for dinosaurs to have existed.?
Professor S. Warren Carey, University of Tasmania.

?? written in a plain straightforward style and its target is a wide public not interested in specialist treatises. Its clear and lively descriptions lead the reader straight to the core of the arguments. ? could well be the topics of joint scientific collaboration between engineers and paleontologists.?
ANNALS OF GEOPHYSICS

Websites: www.oneoffpublishing.com
Dinosaurs were impossibly large creatures which dwarf the life of today. Dinosaurs and the Expanding Earth presents a startling new theory to explain the gigantic size of these monsters from an ancient time. The eBook resolves the major riddle of the dinosaurs' large size by presenting convincing evidence that the dinosaurs lived in a reduced gravity. This eBook edition provides a readily available publication to allow you to examine why many readers now support this groundbreaking new dinosaur book.

In October 1987, whilst on a lazy holiday, I pondered on this question of the dinosaurs' gigantic size compared with present-day life. As a design engineer, I was particularly interested in calculations which showed that the bones of the larger dinosaurs were too weak to support their own body weight. Here was the essential paradox of the dinosaurs' large size. Their bones should buckle and crack. Yet the fossil bones in museums around the world showed that these giants had thrived in their own world of hundreds of millions of years ago. How can both of these statements be true?

There is one simple, yet astonishing, answer. The size of all life is controlled by gravity. A stronger gravity would tend to reduce the size of life whilst a weaker gravity would allow life to become larger. Dinosaurs may have become so huge because the earth's surface gravity was weaker than present.

The explanation is beautifully simple in its clarification of the dinosaurs' gigantic size. Using the concept of an increasing gravity allows a fascinating new world in which the gigantic animals of the past were forced to develop smaller sizes as gravity increased to the present day value. There can be no doubt that this size reduction of life has taken place. After the dinosaurs became extinct, a range of supergiant mammals reached the size of the smaller dinosaurs. Millions of years after them came giant versions of the animals of today. These died out within the last few million years to leave their smaller present day cousins.

Could gravity have been less in the past? My book is an attempt to explore the possibility.

Since the book's first publication I've been astonished at the number of people who have written to inform me that they had reached exactly the same conclusion. A reduced gravity during the Dinosaurs time would have allowed them to reach gigantic sizes. But they had not been able to explain how gravity has increased and so many of them abandoned the idea. Certainly the most difficult part to explain is not why gravity must have increased but how this increase has occurred.

In the book I offer a number of possibilities but I investigate one explanation in great detail. This is a concept that has been augured about for over 50 years - The Expanding Earth theory. I devote a whole chapter to the history of the evidence supporting the Expanding Earth theory. In other parts of the book I examine how an increase in size and mass of the Earth would result in an increase in the Earth's gravity. I explain how this gravitational increase can be calculated from the geological evidence for the Expanding Earth. The gravitational increase provided by these calculations is the same as that required to explain the gigantic size of the Dinosaurs! Is this just coincidence? I'll let you decide.