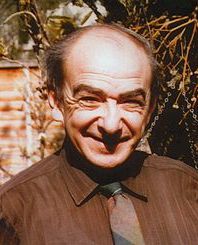 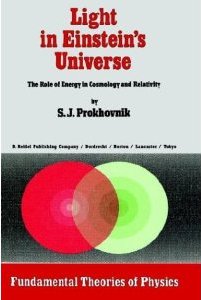 View count: 1
Buy it now
Light in Einstein's Universe: The Role of Energy in Cosmology and Relativity
by Simon J. Prokhovnik

This book takes a robustly Lorentzian view of the subject, following his teacher G J Builder, who was arguably Dingle's most weighty opponent in the celebrated Dingle-McCrea war of the late 50's. There is none of the pussyfooting or ambiguity that disfigures the standard treatments; everything is precisely defined and you know exactly what the author is saying. One is reminded of the stenotypist's response to Feynman - "When the other fellas talk, I type what they say, but I don't understand what they're saying. But every time YOU get up to ask a question or to say something, I understand exactly what you mean - so I thought you CAN'T be a professor!" Such an approach appears to be justified by Einstein's statements (compare, e.g., CPAE, v3, Doc.18, p355 of the English edition, where he seems to say that his and Lorentz's approaches are equally valid ways to the same objective reality, in the same way as Boltzmann's concrete and Clausius's abstract approaches are equally valid ways into thermodynamics; this 1911 comment being backed up by much stuff in the 20's - see, e.g. 'Sidelights on Relativity' in Dover). Prokovnik's views are however controversial as many influential physicists maintain that Einstein's and Lorentz's views lead to quite distinct physical theories (cf Holton who puts this view with particular clarity). I find this hard to justify historically but there it is; perhaps one could counter-argue that modern treatments of relativity depart from Einstein, there being some evidence for this in the later (1936-43) papers. In any case I think Prokhovnik's book deserves much wider circulation; its down-to-earth Aussie commonsense brings a breath of fresh air to a murky territory. There is a notable mathematical appendix establishing the invariance of Maxwell's laws under the Lorentz transforms; a result much quoted but rarely proved. - Amazon