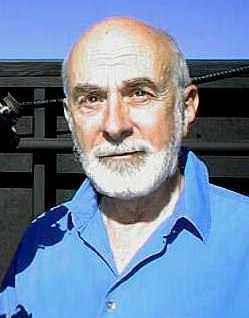 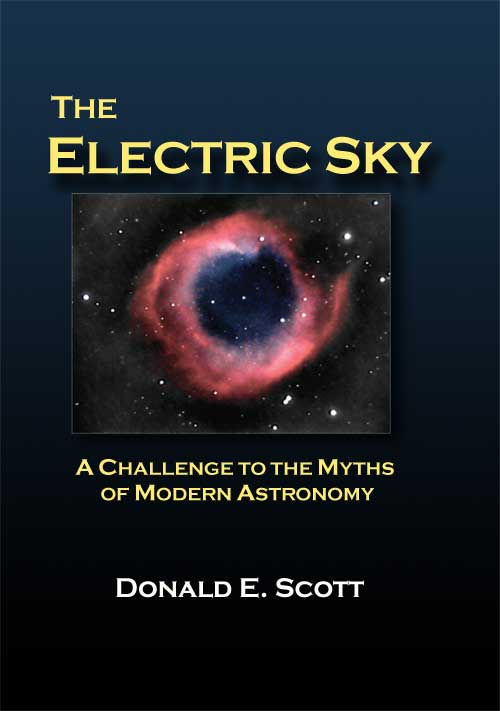 View count: 1
Buy it now
The Electric Sky: A Challenge to the Myths of Modern Astronomy
by Donald E. Scott

Websites: www.electric-cosmos.org www.thunderbolts.info/electricsky.htm
It is clear that electric plasma research affords simpler, more elegant, and more compelling insights and explanations of most cosmological phenomena than those that are now espoused in astrophysics. This book contains astronomical science for the expert written for the public.

In recent years we have read about the "discovery" of black holes, neutron stars, cosmic strings, and such things as dark energy and invisible matter. Anyone who reads Sagan, Hawking, and the other popular astronomy writers can see how complicated and counter-intuitive the concepts of modern astrophysics are becoming. Even so, until recently, I assumed that astronomers and astrophysicists knew what they were talking about.

It was when astrophysicists began saying things that I, as an electrical engineer, knew were wrong that I began to have serious doubts about their pronouncements. But I agonized over whether those doubts were legitimate. Even though my life-long avocation has been amateur astronomy, my formal background is in engineering - not astronomy or cosmology.

Earning a doctorate in electrical engineering eventually led to my teaching that subject at a major university for thirty-nine years. What troubled me most was when astrophysicists began saying things about magnetic fields that any of my junior-year students could show were completely incorrect.

If astrophysicists were saying things that were demonstrably wrong in my area of expertise, could it be that they were making similar mistakes in their own field as well? I began to investigate more of the pronouncements of modern astrophysicists and the reasoning behind them. This book is an account of what I unearthed when I started digging into this question.

It is becoming clear that knowledge acquired in electric plasma laboratories over the last century affords insights and simpler, more elegant, more compelling explanations of most cosmological phenomena than those that are now espoused in astrophysics. And yet astrophysicists seem to be intent on ignoring them. Thus, lacking these fundamental electrical concepts, cosmologists have charged into a mind-numbing mathematical cul de sac, creating on the way a tribe of invisible entities - some of which are demonstrably impossible.

I have tried to hack a path through these hypotheses, contradictions, and alternative explanations that will be clear and understandable for the average interested reader to follow. The answers to the questions we ask are not stressfully convoluted and arcane - rather, they are logical, straightforward, and reasonable - and long overdue.

I hope your journey through these pages will be meaningful, educational, perhaps exciting, and most important of all, eye-opening.

I really love this book. It is causing me to rethink a great deal of my own work. I am convinced that The Electric Sky deserves the widest possible readership.... I felt genuine excitement while reading and felt I was delving into a delicious feast of new ideas. -- Gerrit L. Verschuur, PhD, University of Manchester. A well-known radio astronomer and writer, presently at the Physics Department, University of Memphis. He is the author of "Interstellar matters : essays on curiosity and astronomical discovery".

It is gratifying to see the work of my mentor, Nobel Laureate Hannes Alfv?n enumerated with such clarity. I am also pleased to see that Dr. Scott has given general readers such a lucid and understandable summary of my own work. -- Anthony L. Peratt, PhD, USC, Fellow of the IEEE (1999), former scientific advisor to the U.S. Department of Energy and member of the Associate Laboratory Directorate of the Los Alamos National Laboratory. He is the author of Physics of the Plasma Universe

You don't have to be an astronomer to enjoy this book. It's an exciting story about how a small group of physicists, engineers and other scientists have challenged the establishment, the big science astronomers who are reluctant to listen to anyone outside their own elite circle. -- Lewis E. Franks, PhD, Stanford University, Fellow of the IEEE (1977), Professor Emeritus and Head of the Department of Electrical & Computer Engineering, University of Massachusetts (Retired)