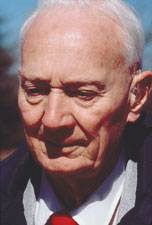 Grote Reber of Bothwell, Tasmania, Australia. Reber is the principal founder of the science of radio astronomy. In Illinois in 1937, he built the world's first substantial radio telescope; soon after, he drew the first map of radio sources in the sky. He moved to Tasmania in 1954 because of its favorable location for observing cosmic radio sources with minimal interference from human radio sources. He was a loyal and involved member of the only organized group of dissident physicists and cosmologists in the U.S. prior to the 1990s, The Association for Pushing Gravity Research--whose members in general accepted and promoted the LeSage theory of gravity, attributing gravity to a pushing force delivered from outside the earth, probably by a gaseous medium, rather than to any pull.

Reber has constantly and firmly opposed the big bang theory, and also any idea that red shifts indicate expansion. He has emphasized that Edwin Hubble never committed himself to any such explanation for the red shifts he discovered. (Interestingly, Reber's mother, then known as Miss Grote, was Hubble's 7th-grade teacher, and did much to encourage his scholarly ambitions.)

Reber's alternative explanation for red shift, developed and published in the late 1960s simultaneously with a similar explanation by NPA member John Kierein, is to attribute it to loss of energy of photons experienced in Compton-type collisions with electrons in space, which are evidently part of a gaseous medium causing the well-known 2.7-degree Kelvin cosmic background radiation. The existence of this radiation was discovered by Reber slightly earlier than by Penzias and Wilson, and he researched it for a much longer time than they did, before publishing. Because of his delay, and because he published obscurely and lacked an active PR campaign on his behalf, they were the ones who received the Nobel Prize.

See his article "Cosmic Static at 144 meters wavelength," Journal of the Franklin Institute, vol. 285 (Jan. 1968), pp. 1-12--one of a great many articles and reports he authored. His biography appears in the Micropaedia section of the Encyclopaedia Britannica . He has read papers at three...