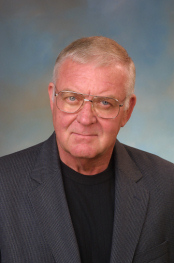 The geophysicist J. Marvin Herndon is the proponent of a radical theory about Earth's core and its relationship to Earth's magnetic field, the shield that protects our planet's animal and plant life from the sun's radiation. According to Herndon, at the center of Earth there is a naturally occurring nuclear‑fission reactor, five miles in diameter, that provides the energy needed to generate and sustain the geomagnetic field. Described as a maverick by Guy Gugliotta in the Washington Post (March 24, 2003), Herndon has encountered resistance to his theory in the geophysics community, but some believe that his concept may prove to be one of the most important contributions to geophysics in the history of the field. ?This is on a scale of {the theory of} plate tectonics, which took 50 years to accept,? Hatten S. Yoder Jr., the director emeritus of the Geophysical Laboratory of the Carnegie Institution of Washington, in Washington, D.C., told Lidia Wasowicz for United Press International (March 27, 2003, on‑line). ?I think Herndon's got something just as big, just as important.? Herndon, an independent researcher, is the president of the Transdyne Corp., a scientific research and management company in San Diego, California.

J. Marvin Herndon was born in Georgetown, South Carolina, on February 19, 1944. He had not yet begun elementary school when his father abandoned the family, leaving him, his mother, and his older sister with meager resources. He took some degree of solace in nature, early on developing a keen interest in the world around him. At 30 he earned a Ph.D. degree in nuclear chemistry from Texas A&M University in College Station, Texas. Between 1975 and 1978 he engaged in postdoctoral work at the University of California at San Diego under the Nobel Prize-winning chemist Harold C. Urey and Hans E. Suess, the co‑discoverer of the shell structure of the atomic nucleus (for which Suess's collaborator, J. Hans D. Jensen, earned a share of the 1963 Nobel Prize in physics). As Herndon told Current Biography, he thus benefitted from several generations of scientific endeavor: as a young man Harold Urey had conducted his postdoctoral research under the guidance of Niels Bohr, recognized as the father of atomic physics, while Hans Suess had learned geochemistry from his father, Fritz Suess, a noted geochemist, whose father, Eduard Suess, an even more famous geochemist, had taught him. As Herndon told Brad Lemley for   Discover (August 2002), ?These guys were giants in their fields. They really taught me how to do science.? Following his postdoctoral work, Herndon spent a year as a researcher at the University of California at San Diego. There, he had a fundamental insight about Earth's inner core that led to a series of discoveries about the nature of the interior of the planet and its internal energy source.

In 1906 the British seismologist Richard Oldham announced the discovery, based on the behavior of waves generated by earthquakes, that Earth has a core, distinct from the surrounding layers, called the mantle. During the next two decades, scientists ascertained the size of the core and determined that it is a fluid. In 1936 the pioneering Danish seismologist Inge Lehmann discovered within the fluid core an apparently solid inner core slightly smaller than the moon and almost four times as dense. Four years later the geophysicist Francis Birch deduced that the inner core is a crystalline alloy of iron and nickel; his reasoning seemed correct within the framework of what was known at the time. Then, in the 1970s, Herndon realized that discoveries made in the 1960s pointed to another possibility regarding the inner core. His 1979 paper on the subject, published in the Proceedings of the Royal Society of London, contains a one‑sentence abstract: ?From observations of nature the suggestion is made that the inner core of the Earth consists not of nickel‑iron metal but of nickel silicide?‑‑that is, a compound of the metallic element nickel and the nonmetallic element silicon. After she read the paper, Inge Lehmann wrote to Herndon, ?I admire the precision of your reasoning based upon available information, and I congratulate you on the highly important result you have obtained.?

?When an important contradiction arises in ethical science, the new idea should be discussed and debated,? Herndon noted to Current Biography. ?Experiments and/or theoretical considerations should be made. If the new idea is wrong, it should be refuted in the literature, preferably in the journal of original publication; otherwise, it should be acknowledged.? But Herndon found that instead of being the subject of discussion and debate, his work was systematically ignored. His grants were no longer renewed, and without that support, his position at the University of California at San Diego was eliminated. Undaunted, Herndon continued his research. He discovered that the interior of Earth has a more highly reduced (low oxygen) state of oxidation than Francis Birch and others had envisioned. Thus, a large fraction of Earth's uranium (a key element in manmade nuclear reactors) is expected to occur in the core, rather than existing solely in the mantle and crust, as had been previously thought. This finding would soon become especially significant.

Earlier, in the 1960s, astronomers had discovered that the planet Jupiter radiates about twice as much energy into space as it receives from the sun. (The same is true of the planets Saturn and Neptune, they later found.) During the next two decades, planetary scientists considered‑‑and eliminated‑‑all the energy sources they thought possible to account for that phenomenon, and declared that ?by default,? the energy being emitted by Jupiter must have originated during planetary formation, 4.5 billion years ago, from the conversion of gravitational potential energy to kinetic energy. In 1990 one of Herndon's three sons, Joshua, read about Jupiter's energy radiation in the book The New Solar System and mentioned it to his father, spurring the senior Herndon to think about the problem. ?Three weeks later, in the grocery store of all places, the answer suddenly hit me,? he told Lemley. ?Jupiter has all the ingredients for a planetary scale nuclear reactor.? In 1992, in the German science journal Naturwissenschaften, Herndon demonstrated the feasibility of planetary‑scale nuclear‑fission reactors as energy sources for Jupiter and the other giant planets (Saturn, Neptune, and Uranus). ?It was only a small step to extend the concept to the Earth,? he told Current Biography. Herndon's articles about Earth's planetary nuclear reactor, or nuclear georeactor, appeared in the Journal of Geomagnetism and Geoelectricity in 1993 and the Proceedings of the Royal Society of London in 1994. He expanded on the concept in three articles published in the Proceedings of the National Academy of Sciences of the United States of America.

Herndon believes that the nuclear georeactor at the center of Earth is the source of energy for the planet's internally generated magnetic field (which causes the magnetic needles of compasses to align in a north‑south direction). It has long been known that the seat of the magnetic field lies at or near the center of Earth, and that the magnetic field cannot exist without a continuous supply of energy. Unlike other natural sources of energy, which change gradually, the georeactor may be capable of shutting down and restarting; thus, its energy output could be variable. Herndon has suggested that the polarity reversals of Earth's geomagnetic field (when north becomes south and south becomes north) that have occurred, as is evident from studies of rock magnetism and magnetic striations on the ocean floors, may be traceable to such variable georeactor energy production.

As happened with his earlier work on the composition of Earth's interior, Herndon's theory about planetary nuclear fission reactors was ignored by the geophysics community and seemed destined to remain almost totally unknown, among both the broader scientific community and members of the general public. That changed with the publication of ?Nuclear Planet,? the cover article of the August 2002 issue of   Discover. Sporadic, spontaneous debates about Herndon's work and its implications appeared on the Internet. Some people asked, for example, whether el ni?o (a disruption of the ocean/atmosphere system in the tropical Pacific that is marked by abnormally warm ocean temperatures and abnormal, sometimes disastrous types of weather) might be linked with changes in the operations of the nuclear georeactor. At least one lesson plan for teachers based on Herndon's work was posted on the Internet. In the scientific community, Walter Seifritz, a Swiss nuclear‑reactor engineer, verified Herndon's calculations and amplified on the implications, and Ramaswamy Srinavasa Raghavan of Bell Labs posted an article, ?Detecting a Nuclear Reactor in the Center of Earth,? on   arxiv.org   (August 27, 2002), on the feasibility of detecting anti‑neutrinos from the georeactor. As of mid‑2003 nothing in the scientific literature had refuted Herndon's work.

Recent studies involving lavas have strengthened Herndon's theory. In the 1960s scientists discovered minute amounts of helium in lava from volcanoes whose roots are extremely deep (as far down as the border between Earth's mantle and core, some scientists believe). The helium consists of two isotopes, helium‑3 and helium‑4. At the time there was no known mechanism for the production of helium‑3 inside Earth, so for three decades scientists assumed the isotope was primordial helium, trapped at the time of planetary formation. Numerical simulations of georeactor activity, described in the Proceedings of the National Academy of Sciences in 2001 by Herndon and Dan F. Hollenbach of Oak Ridge National Laboratory, showed that helium‑3 and helium‑4 would be produced by a nuclear reactor at the center of Earth in precisely the ratios observed in lavas‑‑strong evidence for the existence of the georeactor. Moreover, the numerical simulations coupled with data on lava led Herndon to conclude that the end of the georeactor's lifetime is approaching, and sometime thereafter, presumably, the geomagnetic field would begin to fade. ?The Earth's nuclear furnace could die in as little as 100 years or as long as 1 billion years‑‑the uncertainty is great,? he told Lidia Wasowicz. In a Coast to Coast AM radio interview with Barbara Simpson (March 15, 2003), Herndon said that the georeactor's demise, and the ultimate disappearance of the geomagnetic field, may be viewed not as an end to life but as the start of an era when people everywhere will learn to work together for their mutual survival. Herndon's article ?Nuclear Georeactor Origin of Oceanic Basalt 3He/4He Evidence, and Implications? was published in the Proceedings of the National Academy of Sciences (USA) in March 2003. The same month saw the release of Jon Amiel's film The Core, a science‑fiction thriller about the collapse of the geomagnetic field; at the World Premiere, Herndon, who had not been a consultant on the film, was nevertheless honored, being accorded the same red carpet treatment that the movie's stars received. In some schools, teachers used the movie in conjunction with lessons about deep‑Earth science.