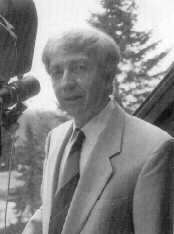 Born and raised in Budapest. He worked first as physicist for high temperature measurements with thermoelements and later as a scientist of high temperature process technics in the industry. He is a known expert of the thermoelements and oxygen probes, his scientific thermoelement-book is now in the third edition (6 000 copies). He owns a factory, where he builds and sells one of the best thermoelements worldwide. His patented thermoelements and oxygen probes are based on his discovery of a new thermoelement-law, which happens to be the base for the model of his "Electric Universe". He also is a candidate of the Hungarian Academy of Sciencess, since 1991. He is married and has four sons. It is not very difficult to guess, what "hobbies" he has. As you can see on the photo, he has a telescope of a diameter of 360 mm in his own house. He searches for sunspots, flares and loops on every sunny day.