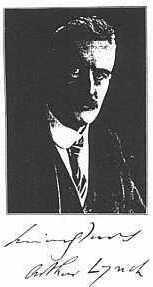 Arthur Alfred Lynch was an Australian civil engineer, physician, journalist, author, soldier, anti-imperialist and polymath. He served as MP in the House of Commons of the UK as member of the Irish Parliamentary Party, and represented Galway Borough from 1901 to 1902, subsequently West Clare from 1909 to 1918. Unlike most of his compatriots, Lynch fought on the Boer side during the Boer War in South Africa and raised his own Irish battalion toward the end of World War I.  Lynch wrote and published a large number of books ranging from poetry, to a sophisticated attempt to refute Albert Einstein?s theory of relativity. - Wikipedia