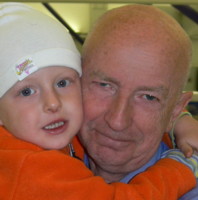 Jailed in 1982 and in 1984 for his participation in political protests
during the liberation of Poland, this mathematician now lives in Mexico, lecturing in Universidad Nacional Autonoma de Mexico, and doing work on relativity and
organizing International conferences on the mathematical physics.

Since 1965 till 2003 also at: Institute of Theoretical Physics
University of Wroclaw, Wroclaw, Poland

In 1991-1992 at Department of Mathematics in Pennsylvania University.

In 2008 at: The University of Texas at San Antonio, Department of Mathematics.

In 2010 at: Southern Illinois University at Carbondale, Department of Mathematics.

From an Article about the Scientist

None in the University of Texas at San Antonio UTSA Department of Mathematics were aware that, the quiet visiting professor from Universidad Nacional Autonoma de Mexico (UNAM), helped organize an underground movement for Polish independence in 1982.

Nor did they know that in June 2007 this humble mathematician received a medal -- the Order of Polonia Restituta (Order of Poland Reborn, or Restoration of Polish Independence) -- from Poland's President Lech Kaczynski for extraordinary and distinguished service to his native Poland.

Professor Zbigniew Oziewicz was a visiting professor at UTSA during the Fall 2008 semester. Although he has returned to UNAM and his home in Mexico City, the UTSA community should know his story.

He looks older than his 67 years, but then, he has lived through a great ordeal. He was born in Wilno, Lithuania, in 1941, just two months after the Germans took that country from Russia. His father was a mathematician, and his mother had a degree in physics. In spite of a German edict that all newborns were to be given German names, his parents gave him the ancient Polish name Zbigniew.

In 1945, Poland returned to Russian control. By the time Oziewicz graduated from high school, the USSR had adopted an education policy of sending each year the 100 brightest university freshmen from its satellite states to universities in Moscow, Leningrad and other Russian cities. Many of those educated under this program returned to their homes as good Communist Party members, bringing with them their new Russian wives.

Oziewicz was among those chosen for education in Russia. He graduated from Leningrad University (now St. Petersburg University) in 1964. He returned, unmarried, to his native Poland. In 1965, he joined the faculty of the College of Mathematics and Physics at the University of Wroclaw in Poland.

But 30 years of Soviet occupation and communist rule wore on Oziewicz and his fellow countrymen. As early as 1975, he knew he must actively work for Polish freedom. At first his activity was personal. He realized that eventually, any organized opposition would need to know where the Soviet troops were located.

So, taking one of his children with him, he rode his bicycle on weekends through the Polish countryside. When he spotted army soldiers, he would stop his bike and mark the location on the map he carried with him.

Out of Polish unrest came Solidarity, the trade union federation and anti-communist movement founded in 1980 at the Gdansk Shipyard and led by Lech Walesa. The following year, however, the communist government outlawed Solidarity and declared martial law. Once again, foreign tanks rolled through the streets of Poland.

Under the leadership of Oziewicz's friend Kornel Morawiecki, 10 friends -- some of them university faculty members -- swore to work for total Polish independence. They met secretly in Morawiecki's forest cabin. Their goal was the elimination of communism and Soviet occupation, not only for Poland, but also for all of Europe. Together they formed an (illegal) underground organization called The Fighting Solidarity (Solidarnosc Walczaca, or SW), a splinter activist group of Solidarity.

Oziewicz takes pride in the fact that he came up with the name of the organization. "I want to show the KGB and Secret Police that we are not afraid," he said. "Lech Walesa fought for free trade unions. We fought for a free Poland."

The movement that started with 10 members grew to 2,000. Fighting Solidarity soon spread across Poland and became a strong underground movement for independence. Oziewicz remained a member of the SW governing council.

"We were encouraged by visits of Pope John Paul II, a Pole, and by U.S. President Ronald Reagan's brave, strong and clear position against Brezhnev's 'evil empire," he explained. Members of the SW swore lifetime oaths of allegiance. "I personally accepted maybe a hundred oaths."

From 1982 to 1990, the SW operated in secret, publishing underground newspapers and books and conducting their nonviolent campaign for independence.

"We set up radio antenna on rooftops where we could transmit freedom message through radio signal for 10 minutes at a time," said Oziewicz. "Ten minutes was not long enough time for the Russian Army to locate a signal. They needed 12 minutes to find it. Then we took down the antenna and moved to another rooftop."

The SW also was able to interrupt television broadcasts for short periods of time to transmit their own messages of independence. In the mornings, Poles and Soviets alike awakened to see new posters plastered on building walls demanding the withdrawal of Soviet troops.

In 1982, Oziewicz and other SW members were imprisoned briefly. Then, in April 1983, Oziewicz wondered if his home might be bugged because the secret police kept learning of their plans. He and friends began searching his home and eventually found a planted listening device in an electric switch plate above the crib of his two-year-old daughter, Emily.

He and his friends removed the switch plate and took it to the hospital where a friend x-rayed it. They then gave the bug to fellow SW members in a factory, who used it to spy on the factory boss, a Soviet informant.

In 1984, Oziewicz was sentenced to three years in prison. By good fortune, however, he was free again by 1985, when Gregory Wene, UTSA professor of mathmatics, first met Oziewicz during a mathematical physics conference in Karpacz, Poland. Both men were interested in Clifford algebra and started a warm friendship and collaboration that has lasted to this day.

Wene, who has been on the UTSA faculty for 30 years, has worked with Oziewicz to organize many mathematical conferences and workshops in Mexico and the United States, serving on organizing committees and as a lecturer.

Together the two mathematicians have conducted research on numerous topics including Frobenius algebra, the Hilbert-Schmidt spaces, abelian group of endofunctors and other topics that only a mathematician could appreciate. They have completed two joint papers, and more are planned.

That brings us to why a Polish freedom fighter was here at UTSA teaching Foundations of Mathematics and Calculus II courses last fall.

Oziewicz and Wene were invited to celebrate the Centenary Anniversary of The Indian Mathematical Society at the University of Calcutta on Dec. 18. For convenience (and friendship), they agreed to work closely last fall on their three lectures, including a presentation on their joint research on alternative relativity theory conducted at UTSA. It was convenient for Oziewicz to come to UTSA as a visiting professor for the fall semester.

Oziewicz is no longer affiliated with the university in Poland. In 1993, he was invited to conduct research and to teach graduate computer science at UNAM in Mexico City. He remains on the UNAM faculty and returned to his Mexico City home following the Calcutta conference.

Before leaving UTSA, however, Polish documentary movie producers visited with Oziewicz in the home of Wene and his wife, Lynn. For two days the filmmakers recorded Oziewicz's memories of life in Poland and the work of the underground organization that contributed to the downfall of the Soviet Union.

Oziewicz is pleased that Poles are preserving the past so that future generations will understand Poland's long struggle for independence. He is quite pleased that Soviet troops finally left Poland in 1993 after 48 years of occupation.

His story would not be complete without mentioning his accomplished family. He is extremely proud of his three adult children and three grandchildren, all of whom remain in Poland. His son Marek is a university professor of English and the author of several books on fantasy and young-adult fiction. Daughter Justyna has a doctorate in philosophy and is the author of two popular books of children's stories in Poland. She hopes they will someday be translated into English and Spanish. Daughter Emily, over whose cribs the Secret Political Police planted the bug in 1983, is a Spanish-English translator.

Oziewicz visited Poland in June 2007. For four days the country celebrated the 25th anniversary of the founding of Fighting Solidarity. He was there to celebrate and to reminisce with old friends and fellow freedom fighters. And, while he was there, he received his hero's medal and recognition from grateful countrymen.