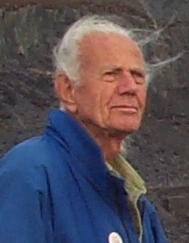 John Lowry Dobson (born September 14, 1915) is a popularizer of amateur astronomy. He is most notable for being the promoter of a design for a large, portable, low-cost Newtonian reflector telescope that bears his name, the Dobsonian telescope.[2] The design is considered revolutionary since it allowed amateur astronomers to build fairly large telescopes. He is less known for his efforts to promote awareness of astronomy (and his unorthodox views of cosmology) through public lectures including his performances of "sidewalk astronomy." John Dobson is also the co-founder of the amateur astronomical group, the San Francisco Sidewalk Astronomers.

John Dobson was born in Beijing, China. His maternal grandfather founded Peking University, his mother was a musician, and his father taught zoology at the University. He and his parents moved to San Francisco, California in 1927. His father accepted a teaching position at Lowell High School and taught there until the 1950s. Dobson spent 23 years in a monastery, after which he became more active in promoting astronomy and his own nonstandard cosmology theories. - Wikipedia: John Dobson (amatuer astronomer)