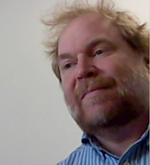 
Michael Claridge received his PhD in physics in 1992 from Brandeis University, working under Don Caspar, studying the biological and statistical behavior of proteins. Prior to that, he spent several years studying binary pulsars with Joel Weisberg at the Arecibo radio telescope. With his brother, he gave traveling lectures about their discoveries in the areas of fractional calculus, fractals, and chaotic systems. He is self published in philosophy and children's stories (both available on lulu.com). Over the past 15 years, he has presented public lectures on such topics as Relativity and Dimensions, Metaphysics in Biology, Transformation in Supernova and Metamorphosis in Biology.