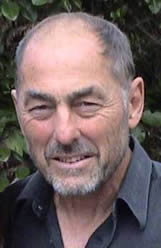 Roger Munday began working life travelling all of the oceans of the world as a Navigating Officer at sea, in the days when you needed to calculate the position of a ship using altitude sights of the sun and stars with a sextant, and he has retained his interest in astronomy and science since that time.

On leaving the sea he finally settled in New Zealand with his family and founded a successful nationwide business, while devoting part of his spare time to building prototypes and testing a number of inventions. His interest in physics was rekindled 15 years ago when frustrated at not being able to find data relating to the effects of the high pressure compression of gases and liquids in the same container, which was needed for a new product development for his company. This wide ranging study of the historical development of the theories of atomic structure of matter over a period of ten years,which involved searching for out of print publications, resulted in the ideas outlined in his book ?Gravity ? The Ultimate Force', published in 2003.

This study included the prehistoric origins of technology and mathematics, which in turn stimulated a diversion to that of human origins, from which the paper on 'Lucy' evolved.

He has now sold his business interests and, as well as writing and other activities, is testing a new type of steam engine, intended for small scale co-generation applications.