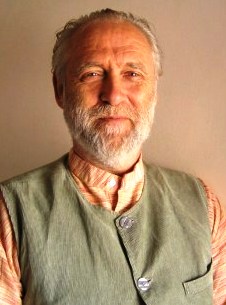 Life: In the 1960s I became a renunciate in India. This absorbed me all through my twenties, during which time I put myself through long periods of isolation, especially in a jungle hermitage. Returning to the West and ?normalcy?, I took up work at thirty as an artisan, established a business partnership and came back to other creative work through Performance Art. After seventeen years absence I am now back in India in yet a new life as an ?environmentalist? and apparently a ?philanthropist? though mostly following the example of Voltaire by ?cultivating my own garden?. I am also a natural healer having had to look after myself for years with scant aid of doctors or hospitals.

Comment: All in all, my life experience has shown me that fundamental truths are no respecter of persons or personalities, or the divisions of our many disciplines, sects, schools, ideologies, or agendas. By the same token, I have always believed that, come what may, the evidence of rational direct heightened experience must appear in a unified physical theory. I also see that the human urge to probe behind appearances raises severe difficulties and that, perhaps surprising to say, both science and religion parallel one another in this regard and in an enlightened world their disciplines would actually converge. I also see that neither should their results be detached, obscure, or so arcane as to be incomprehensible and secured exclusively for the elect. Quite apart from their diverse interpretations the physical laws of modern science have always raised the marker for ?common sense? while at the same time describing a wonderful depth of connectedness, economy, and thus comparative simplicity; wouldst that our civilization could learn more of this from Nature!

Ether: Working with F. V. Fernandes on his papers and on our book The Ether Model & The Hand of God has been a rare privilege, to contribute my mite towards at least one philosophical step, the validation through measurable states and entities of the immediacy of our belonging to the living breathing universe around us.

Performance Art: Initiating a troupe of ?Urban Aboriginal? Mudpeople performing all over the United States in the 1980?s. Earth Day NYC (1990). Rites of Spring to Save the Gardens of the Lower East Side (1990-91) with Felicia Young: http://www.earthcelebrations.com/

In Preparation: Chronicles of an Ascetic Hedonist (Three Volumes)