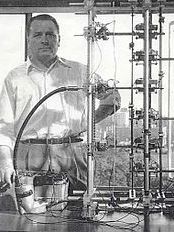 Norman L. Dean received his early education in a one-room prairie schoolhouse on the plains of Saskatchewan, Canada. Dean was a product of a wholesome educational environment, based upon sound English textbooks, as the English have always been recognized for their thoroughness in the basics. His young interest was improved upon by his Mother, a former school teacher, and, one of his prairie neighbors, Professor Hoffman, a wealthy German immigrant, who had been educated at the University of Heidelberg. Prof. Hoffman regularly tutored Dean in physics and the sciences.

Dean was not a professional physicist, but it was his great interest and passion. Dean was supported by his career in finance. He was highly regarded as an expert in mortgages. Through the years, Dean became an expert in finance and especially real estate; he later became a high-ranking US Government employee, serving in the Federal Housing Administration as the Deputy Chief Appraiser for the United States.

The Dean drive is a device intended to be a reactionless thruster that was invented by Norman L. Dean. Dean claimed that it was able to generate a uni-directional force, in violation of Newton's Third Law of Motion. Such a violation is generally considered to be impossible in physics.

The Dean drive obtained a good deal of publicity in the 1950s and 1960s via the columns of John W. Campbell, the longtime editor of Astounding Science Fiction magazine. Campbell believed that the device worked and claimed to have witnessed it operating on a bathroom scale.

Dean, who was trying to find potential buyers for his technology, was secretive about the details of how it was supposed to work, but it was said to contain asymmetrical rotating weights and to generate a great deal of vibration. Dean and Campbell claimed that Newton?s laws of motion were only an approximation, and that Dean had discovered a fourth law of motion. This has been described as a nonlinear correction to one of Newton's laws, which, if correct, would allegedly have rendered a reactionless drive feasible after all.

Dean's Legacy, has inspired countless thousands to reach for their dreams and goals, for decades many thousands have followed his work, and continue to seek the secrets of the Dean System Drive. Norman Lormer Dean died on December 20, 1972.