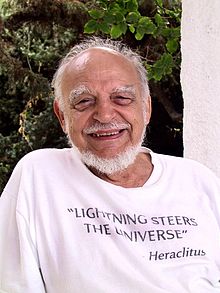 Political theorist and natural philosopher, Alfred de Grazia was born in Chicago on December 29,1919, was granted the AB and PhD degrees at the University of Chicago, studied law at Columbia, taught at several universities, including Stanford and New York University, and has written and published many books and articles, mainly in Political Science and Quantavolution (the study of ancient catastrophes),but also including poetry and novels. He wrote "Public and Republic" and "The Elements of Political Science: Political Organization and Political Behavior." His main book in world affairs is called "Kalos: What is to be Done with Our World?" This and other works are carried on his site, grazian-archive.com, whose annual visits amount to several millions. With Jill Oppenheim (1919-1997), he parented seven children. His military service carried him in World War II into six campaigns in North Africa and Europe, encountering, as the Psychological warfare unit he captained moved forward, the immense human disaster and displacements, and the concentration camps (Dachau). He founded and published the "American Behavioral Scientist." He was frequently a consultant, to the State Department, the Department of Defense, and General Motors Corporation, among others, and traveled widely for business and research. Politically a radical idealist, he nevertheless at times campaigned on behalf of the Independent Voters of Illinois, the Democratic Party of California, and the Republican Party of New York. His two latest books are: "The Iron Age of Mars" (2006), and "The American State of Canaan" (2009).