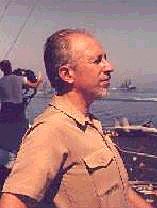 Dr. Eldon Byrd (1939-2002) was an Electrical and Medical Engineer with academic degrees from both Purdue University and George Washington University. He was a POLARIS submarine expert for industry, and held various positions in the US Government, including Strategic Systems Analyst, Operations Research Analyst, Cryogenic Engineer, Head of the Department of Defense Environmental Projects Office, Project Manager for the Navy's Metal Matrix Composites Program, and Project Manager of the Marine Corps Non-Lethal Electromagnetic Weapons Project. He was considered to be an expert in the biological effects of extremely low frequency magnetic fields and authored many professional papers and reports on the subject. - http://elflabstech.com/technology.html

In 1968 Eldon Byrd published a paper on the telemetry of brain waves in the "Proceedings" of the International Telemetering Conference, 1972. Byrd: Physical Scientist at the Naval Surface Weapons Center, White Oaks Laboratory, Silver Springs, Maryland (1968- unknown, at least 1981) Byrd describes his work with Naval Surface Weapons as "predicting what war will be like in the future.