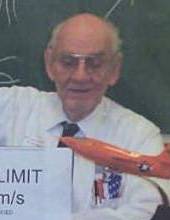 Homer Benjamin Tilton, born in Montana, served on active duty in the U.S. Air Force during the Korean Conflict 1950-55. After retiring in 1989 from 34 years as an electronics engineer in the aerospace industry, he joined the faculty at Pima Community College where he presently teaches mathematics. Educational vitae: B.S. obtained in engineering physics from Montana State (1950); admitted to the U of Arizona graduate college (1957); received graduate credits in engineering and physics from UCLA Ext. (1960); engaged in masters program in physics at the U of Arizona (1962-64); engaged in doctoral program in physics at the U of Arizona (1973-76).

Florentin Smarandache, born in Romania, escaped to the West in 1988. He received his Ph.D. in Mathematics from the State University of Kishinev in 1997. A prolific writer, he is the author, co-author and editor of 70 books and 90 papers in mathematics, physics, literature, philosophy. In November 2004 he was invited to lecture at NASA Langley Research Center. He teaches mathematics at the University of New Mexico, U.S.A.

TUCSON, Ariz. - Bainville native and former Wolf Point resident Homer B. Tilton, 84, of Tucson, Ariz., an Air Force veteran and retired electronics engineer, died of natural causes March 24 at a Tucson hospital. Burial took place March 30 at the National Veterans Cemetery in Sierra Vista, Ariz., under the direction of Bring's Funeral Home of Tucson. Survivors include his wife of 54 years, Sue Tilton of Tucson; and a sister, Virginia Jo Taylor of Conrad.