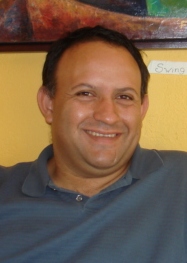 Ever since I was like 5 years old, I dream about having a vehicle that can go from my grandparents farm to the town and come back in a few seconds. Those images in my mind had led my life. First, I started learning about cars. I worked in mechanic shops since I was 10 years old until I was 17 years old. At that point, I knew I had to learn more if I wanted to do something significant about that dream of mine. So I enrolled in the university majoring in mechanical engineering in Guadalajara, Mexico. I did not like the education I was getting so I decided to come to the US. I went to Los Angeles Community College, then I transferred to California State University in Los Angeles (CSULA) where I got a bachelor degree in Mechanical Engineering in 2006. I went back to CSULA in the winter of 2008 and graduated with a Masters degree in Mechanical Engineering in the summer of 2009.

I religiously volunteered in the Rocket Project at CSULB from 2002-2006. I was closely involved in the manufacturing and testing of more than 10 rocket engines and about 8 launch vehicles. By my senior year, I was already considered a mentor, not a student. I have not done much for the rocket group anymore. Rockets no longer excite me as much as they used to. Rockets won't take me to where I want to go. Rockets won't fulfill my life-long dream. There is got to be something better. Or we have to come up with something better.

I worked in the manufacturing industry from 2005 to 2010. The first 3 years I worked as a design engineer the other 2 years I worked as a manufacturing engineer. I like to build things. I like to test them. I love to fly them. This is why my emphasis in the master program was in manufacturing. I like to replicate experiments, the correct way.  Theory is one thing. Making useful things with it is a whole different thing. I want to be the connection between the theoretical ideas and the practical devices. I can understand the theory and I can also build experiments. I'm the one that makes things happen.