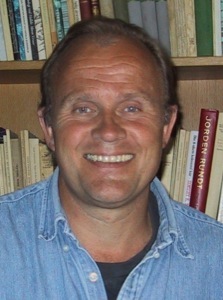 As a young boy I wanted to become an actor, subsidiary a writer of great novels - until the day my teacher in junior high school started to chase that x on the blackboard. I couldn't make sense of what he was doing, and I couldn't make myself follow meaningless mathematical recipes. I have never been very good at following recipes, not even in cooking - which I actually enjoy a lot. Because I couldn't make my left brain do what the right brain didn't grasp, my relationship to math grew into love-hate, which finally ended up on the love side after years of battle with the abstract concepts. In my student days every new semester presented new revelations of beauty and order in Nature and in the world of mathematics. The power of reductionist thought appeared unlimited. I wanted to study the smallest constituents of matter, subnuclear physics, ?The Theory of Everything?.

Then I had two courses in statistical physics, and realized that a lot can be said about the behavior of matter without using much knowledge about the microscopic laws. After finishing my undergraduate studies in Oslo in 1973 I moved to the new arctic university in Troms?, and started studying plasma physics: the physics of many-body systems of charged particles - the state of matter believed to comprise more than 99% of the matter in the universe. The plasma state spans over enormous ranges of particle densities and temperatures, but in most cases it can be described by classical physics, Newton' s laws and Maxwell's equations for the electromagnetic field. Yet I learnt that the fundamental laws in their raw form were of little help in describing the actual dynamics of plasmas.

The first thing I learnt was that the complexity of an enormous number of ordinary differential equations describing an enormous number if interacting particles had to be reduced by some coarse graining of the description. This process of simplification, involving construction of kinetic equations and finally fluid equations, inevitably involves neglect of some many-body correlations, and hence the simplified models should in some sense be ?less accurate?. On the other hand, the simplified equations - like the fluid equations with some friction terms included (a simplified pair correlations between particles) - have the remarkable property that it gives time a direction. While the ?accurate? microscopic equations are time-reversible, the ?inaccurate? simplified dissipative model is irreversible. One of the deepest experiences we have as living beings is that time has a direction. We do not grow younger. So in a sense, the simplified model is more accurate, since it makes a better representations of the reality we observe.

During the 1980's the new paradigm of deterministic chaos started to influence the sciences. The realization that simple systems and simple models with few degrees of freedom can exhibit extremely complex behavior was a shock to many scientists (also physicists), and even today the profound implications of this fact is not fully appreciated in the entire physics community.

Another insight that also emerged in the 1980's was the omnipresence of scale-invariance in Nature, an insight that can be attributed mainly to Benoit Mandelbrot and beautifully described in his book ?The Fractal Geometry of Nature?. Per Bak and his collaborators demonstrated that such scale-invariance appears spontaneously in so called sandpile models. These are cellular automata with many degrees of freedom, but with extremely simple local interactions. This scale-invariance implies that the system organizes itself into a state where dynamical structures (often called avalanches) appear at all available scales in space and time. Such critical phenomena were already known from phase-transitions in equilibrium statistical physics, like the distribution of ice-flakes on a pit at the moment of freezing. But in those cases the temperature must be adjusted to the freezing point. In the sandpile models the system organizes itself into the critical state and remains there, which is why Per Bak named the phenomenon self-organized criticality (SOC) and suggested that it could explain at least part of the ubiquity of scale-invariance in Nature.

The significance of the SOC-paradigm remains controversial, but the idea of modeling reality as complex systems consisting of a large number of interacting agents that exhibit emergent global behavior not imposed by an external controller, is now accepted as a fruitful approach in many scientific communities.

On the pages of this web-site you will find brief descriptions of how complex system science can be used as an approach to understanding a wide range of phenomena belonging to different disciplines of science. The selection of approaches and phenomena reflects the interests of the Complex Systems Group, but the plan is to expand the site as we learn more, and as more people join our informal group.

One of the main challenges is to develop a language of complex system science that can be understood across the disciplines. We have to drop some of our specialized jargon, without ending up with new-age science. We need to fight the dyslexia of the computer freaks and the dyscalculia that permeates the humanities and our young generation. We need to promote a new type of scientists - the translexuals.