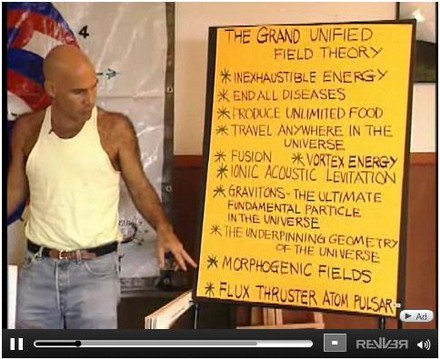 Rodin published, "The Quantum Mechanic State of DNA Sequencing", in the proceedings of the International Bio-Technology Expo (IBEX), which is the largest genetic engineering conference in the world and is heavily attended by the Japanese. He was also invited to present his paper, "Low Cost Propulsion Systems Based Upon the Re-evaluation of the Physics of Matter", at the Air Space America convention, the largest U.S. convention of its type. The Rodin Coil Antenna won a U.S. military design contest as the most powerful antenna with the greatest pickup over the longest distance and was awarded a government contract for incorporation into the nation?s first alert warning system.

Rodin has standing offers from top engineers and scientists at high-tech corporations and agencies, including Microsoft, NASA, Boeing, as well as leading university academics. They all say the same thing ? that their existing work has little meaning to them in light of the Rodin Solution and that what they most desire is to dedicate themselves fulltime to working on the Rodin Solution. As a result, Rodin is capable of assembling a team of the finest scientists, mathematicians, engineers and academics from the ranks of the most advanced scientific and technology companies and universities in America.

Rodin has been an instructor in state of Hawai?i schools designing new math curriculum from elementary to higher education school students.