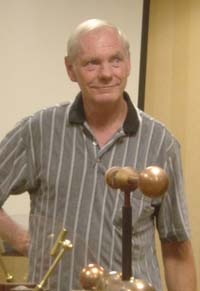 
From: http://www.lauralee.com/wysock.htm
William C. Wysock has been building Tesla Coils since 1962. In 1975, he developed a line of commercial grade Tesla Coils designed for sale to museums of science and industry, historical institutions, government and private research institutions. Ten standard models known as "Model One" through "Model Ten", were all built from the highest quality materials and components available. Each of these units featured a form of high voltage discharge electrode known as a "toroid." The use of this type of electrode greatly improved the working efficiency of each of these models, and was the result of many years of experimentation from 1962 up to 1975.
In 1987, Mr. Wysock began a company known as Tesla Technology Research, specializing in high voltage engineering and development, providing equipment for sale and for lease/rental. One additional area of the company's involvement has been providing special effects for the motion picture/television/magazine/advertising media industries, both in still graphics and video promos. Projects have included films such as "The Entity," "Friday the Thirteenth-Part Six," "Heartbeeps," "Pennies From Heaven," the trailer for "Something Wicked This Way Comes," television series such as "Battlestar Galactica" "The Incredible Hulk," "Out of This World", "World of Wonder" and "Invention"-The Discovery Channel. The MTV music videos "Edison's Medicine" performed by the rock group "Tesla" and "Too Hot!" performed by the wrap artist Coolio, both feature Tesla coil discharges designed and performed by Tesla Technology Research. Magazine publications have included GQ, Discover, GEO (Germany), National Geographic, and Sports I llustrated for Kids. Theme parks and other installations have included The Petersen Automotive Museum, Los Angeles, CA, "Earthquake" and "Jurassic Park"-MCA Universal Studios Tour, Universal City, CA and Orlando FL, Walt Disney World-Future World Alien Encounter, Orlando FL, and Dave Archer Studios, Navato CA.
Tesla Technology Research presently has large Tesla Coil systems installed in museums and research centers world wide, ranging from Canberra, Australia to Hiroshima, Japan, as well as over 100 units throughout the United States, including a Model Ten Tesla Coil system that was originally used for directed airborne particle beam weapon research, and is now a part of the High Voltage Engineering Laboratory at Ohio State University. Tesla Technology's most recent project is a 17 million volt magnifying Tesla Coil system running on 100 kilowatt + input and developing arc lengths greater then 50 feet. Recent completed major Tesla Coil projects have included a dual coil system (Model 12,) that produces arcs over 40 feet long with an output in excess of 6.5 million volts, and Model 13M, a magnifier type coil, with an output of over 16 million volts and arcs over 50 feet long.