View count: 1
Buy it now
The Scientist, the Madman, the Thief and Their Lightbulb: The Search for Free Energy
by Keith Tutt

For aeons, scientists have dreamed of the possibility of fuel-less energy, a low-cost way to rid the world of the stranglehold that the oil-rich nations can exert on the rest of us. But does the dream remains unfulfilled due to insufficient scientific breakthroughs, or something more subtle and complex? Keith Tutt provides a possible answer, and it makes for intriguing if uncomfortable reading. For over a century, a diverse group of scientists, working without government sponsorship, have been refining innovations which might end the domination of fossil fuels; their discoveries have the possibility of granting the world the ultimate prize: electricity available to all at zero cost. Such discoveries are not in the realms of science fiction - so why are we not enjoying the fruits of this research? Anyone who's seen the Ealing film The Man in the White Suit, in which an indestructible fabric is ruthlessly suppressed by big business, will quickly see the villains of the piece here. The energy market, in thrall to all-powerful oil domination and even the vested interests of the scientific establishment, is a formidable opponent, as the mavericks and innovators of Tutt's assiduously researched narrative learnt to their cost. The cast of characters here are worthy of a thriller, and even the duplicity, murder and jealousy seem to have strayed in from some fictional genre. But this is the real thing, with the bitter but often sardonically funny ring of truth. Tutt brilliantly celebrates these unorthodox talents and opens the eyes of those ignorant of their remarkable work. (Kirkus UK) 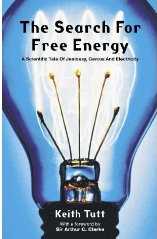 View count: 1
Buy it now
The Search for Free Energy: A Scientific Tale of Jealousy, Genius and Electricity
by Keith Tutt

This work reveals the work of inventors and scientists who are developing clean and "fuelless" ways to produce the electricity we need for the 21st century and beyond. It looks at the technologies that could drastically change the economic, political and environmental conditions of the world we live in. If developed commercially, they could offer almost costless energy and end the oil economy throughout the world. The book also investigates the psychology of invention and the claims that some inventors trick gullible investors out of their savings.