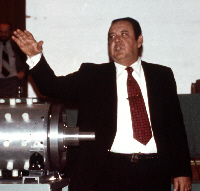 Edwin Vincent Gray was born in Washington, DC in 1925. He was one of 14 children. At age eleven, he became interested in the emerging field of electronics, when he watched some of the first demonstrations of primitive radar being tested across the Potomac River. He left home at 15 and joined the Army, but was quickly discharged for being under age. At 18 he joined the Navy and served three years of combat duty in the Pacific. He narrowly escaped death when a bomb exploded on his ship's deck during an attack. He received an honorable medical discharge after spending some time in a navel hospital with head injuries.

After World War 2, he married his first wife, Geraldine, and started a family in Maryland. He worked as an auto-body and fender repair man. In 1956 he moved his family to Venice, California. A few months later he moved to Santa Monica where he began his first business named ?Broadway Collision?. A couple of years later, he opened a second shop in West Los Angeles. Both locations failed early in 1960 due to an economic downturn. He relocated to Prescott Arizona, and then to Littleton, Colorado in 1961. From 1962 until 1964, he worked in Las Vegas, Nevada, always in the auto-body repair business.

By 1965, Gray relocated to southern California again, and established a partnership with George Watson. Watson was a master car painter with an established clientele of Hollywood celebrities. A new location was established in Van Nuys, California on Calvert Street called ?The Body Shop?. It was a one-stop, high-end custom autobody & painting shop. This business prospered well for the next three years until a conflict of romantic interests ended his first marriage (with seven children) in early 1968. A divorce followed in 1969...

"In 1973, Ed Gray burst onto the scene in southern California with a radically advanced electric motor technology. His EMA motor could produce 80 Horse Power from a set of four deep-cycle batteries that the system recharged at the same time. The claims were outrageous, but were supported by much of the testing data. One set of early tests were sponsored by the Crosby Research Institute and conducted by Pan World Enterprises, Co. Ltd. On the strength of these test results, Bing Crosby became one of Ed Gray's largest investors.

"Besides the motor technology, Gray also routinely demonstrated a solid-state power supply that produced up to four times more power than was usually available from its internal battery pack. He configured this invention into a self-contained "Camper Light" that could run light bulbs with a "cold electricity" for an entire weekend on a single charge. The energy coming from the system was so safe, that children were allowed to play with it in a bowl of water." - Free Energy