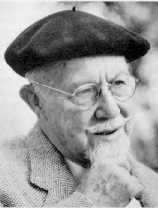 Walter Russell was an American polymath best known for his achievements in painting, sculpture, architecture, and for his controversial unified theory in physics and cosmogony. He posited that the universe was founded on the unifying principle of rhythmic balanced interchange. This physical theory, laid out primarily in his books "The Secret of Light" and "The Message of the Divine Iliad", continues to be rejected by mainstream academia. This is mainly due to the fact that scientists assume the existence of matter and Dr. Russell assumes the existence of mind. Russell was also accomplished in philosophy, music, ice-skating, and as a professor at the institution he founded, the University of Science and Philosophy. He is also credited for coining the term 'New Age', which did not become a mainstream term until much later. - Wikipedia