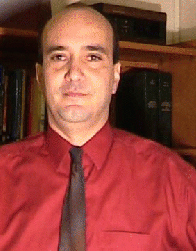 Fr?d?ric Malmartel has a scientific training. He is graduated in mathematics and physics from the University of Paris XI ( Orsay ).

Apart his interest in paleontology, Mister Malmartel is also interested in Mathematics of Chaos.
He is an amateur astronomer. He is fond of cryptozoology - search for unknown animals - and especially relic-neanderthal
men, these beings who are supposed to have survived after the official date of their extinction - they're called homins - .
He is also a writer, wrote a novel and several short stories, he likes History.
Mister Malmartel knows very well the History of the Byzantine Civilization.

Mister Malmartel is now studying a model inspired from Catastrophe Theory which will allow us to apply mathematical models to History.

He works on networks and informatics architecture for a great french administration.

He was born in 1963 in Juvisy-sur-Orge (France), he has two children: R?my and Elv?na, he lives in France in the region "Centre".

If the astronomer Dirac has been the first man to imagine that the gravitational constant G could change, Mr. Malmartel is the first one to have connected this change with dinosaurs' extinction through the Gravitational Hypothesis presented on this site since year 2000.