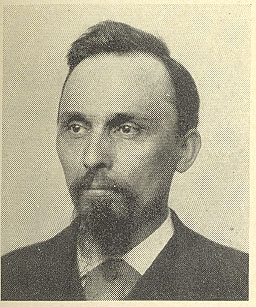 (Encyclopedia of the History of St. Louis, vol.3, 1899)
Nipher, Francis E., scientist, was born December 10, 1847, at Fort Byron, New York. With his father he came west to Iowa City in 1864, where he entered the University of Iowa two years later, graduating in 1870 with such high honors that he was immediately called to a tutorship in that institution, remaining as an educator in scientific branches for a period of four years. He was then offered a professorship in Washington University, at St. Louis, and took the chair of physics. During the next few years, while attending to his duties at the University, he wrote and published a number of valuable papers on "Animal Mechanics." he also contributed to the St. Louis Academy of Science and to the "American Journal of Science" articles on the distribution of errors in numbers written from memory, "A New Form of Lantern Galvanometer", etc. On private means he conducted a magnetic survey or Missouri from 1878 to 1882. In 1877 he organized the Missouri Weather Service on the same system then prevailing in Iowa, and which was afterward adopted by most of the other states ...

Professor Nipher was for several years president of the Academy of Science and also president of the Engineers' Club, writing the reports of the transactions of the former for five consecutive years ... He has also contributed numerous papers to scientific journals, American and European, on "Electricity", "The Steam Engine", etc. His "Theory of Magnetic Measurements," published by Van Nostrand in 1886, and "Electricity and Magnetism, 1895, are standard works on these subjects. - http://library.wustl.edu/units/spec/exhibits/crow/nipherbio.html