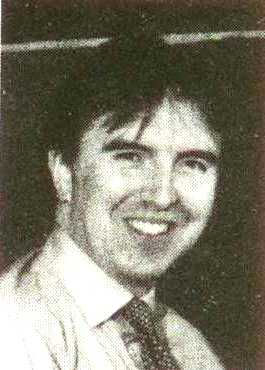 View count: 1
Buy it now
The Hunt for Zero Point: Inside the Classified World of Antigravity Technology
by Nick Cook

Imagine the power, economic and military, that would fall into the hands of the person who figured out how to bypass the ordinary laws of physics, defy gravity, and travel near the speed of light.

Though it sometimes seems to fall in the realm of science fiction more than pure science, aviation-technology journalist Nick Cook's intriguing tale involves the long quest to develop antigravity vehicles and the sometimes eccentric characters who have played a part in it: Nazi rocket engineers, backyard inventors, NASA scientists, conspiracy theorists, and UFO watchers among them. The last group figures, Cook explains, because the ideal craft for "electrogravitic reaction" would take the form of a disc, a design consideration seen in the shape of current stealth aircraft. It could just be, the author suggests, that what witnesses have taken to be flying saucers might instead be antigravity-aircraft prototypes, though he cautions that "the subject is too complex ... to conform to a single explanation."

And therein hangs a good part of this always interesting, if admittedly speculative, story, which, regardless of the truth of the matter (or, perhaps, antimatter), will appeal to techies and Trekkies alike. -- Gregory McNamee

From Publishers Weekly
For the last 15 years, Cook has been an aviation reporter and editor at Jane's Defence Weekly, a defense industry trade journal that one would expect to find Cheney and Rumsfeld discussing on the way to the briefing room. A full-length project from a high-ranking Jane's editor creates a certain confidence in the contents, yet, as Cook makes clear, most of what's in this book won't be found in Jane's, as the evidence for "zero point energy" is less concrete, even if just as scrupulously sourced here. The book begins when Cook jokingly calls the possibility of antigravity drives "the ultimate quantum leap in aircraft design" in one of his Jane's pieces more than 10 years ago. A few years later, someone anonymously slips him an article, dating to the 1950s, that shows officials at Lockheed Martin and other big contractors claiming they were close to exactly that. Intrigued, Cook takes the bait and follows the trail to the wildest territory imaginable: destroyed or pulled reports; disappearing battleships; silent, glowing flying discs; time distortion; Nazi slave labor. To simplify in the extreme: Cook has found evidence that Nazi scientists had tapped into zero point energy the quantum energy that possibly exists within vacuums in amounts that make nuclear energy look like a joke (enough energy in the space of a coffee cup, Cook explains, to boil the world's oceans six times over). When WWII ended, Nazi secrets were plundered by the U.S. Army, which spirited them, along with many of the German scientists themselves, into "black" programs not acknowledged by the government and which may have produced working aerospace technology based on zero point. Through his cover as a Jane's reporter, Cook seeks out the stealthy wonks of this top-secret world, but readers will have to wade through some opaque thumbnail descriptions of the science and arcane WWII history to understand what he and others are getting at. It is well worth it. 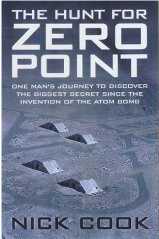 View count: 1
Buy it now
The Hunt for Zero Point: One Mans Journey to Discover the Biggest Secret Since the Invention of the Atom Bomb
by Nick Cook


This book reads like a detective story, a thriller or science fiction. Yet it's a work of non-fiction based on a decade's worth of investigation, interviews and archive research. The fact that the author, Nick Cook, is Aviation Editor for Jane's Defence Weekly gives this tale of hush-hush conspiracies and anti-gravity technology a real air of credibility. Cook maintains that during the Second World War Nazi scientists made a breakthrough in counter-gravitational research that resulted in workable projects. He further maintains that research into anti-gravity has been ongoing in the United States for decades. But that information has been deliberately suppressed and misinformation spread so no one can confirm the existence of this highly classified technology. Cook started researching when he mysteriously came across an article from 1956 in which the US aerospace and defence industry seemed to declare that gravity-control was within reach. But then nothing, at least according to the official version. Now Cook's curiosity is roused and he sets off like a knight-errant in search of the 'Holy Grail' of aerospace propulsion technologies, as he puts it. To do this he must enter the strange world of Pentagon spooks. Cook may not prove anything but he makes outlandish fantasy seem plausible. It seems undeniable that attempts have been made to harness gravity in the last century. Who knows what the 21st century will bring? And whether you believe any of it or not, Cook's account is written in an engrossing and entertaining manner which makes the book hard to put down. (Kirkus UK)

When Nazis, flying saucers, and government conspiracies figure in a single narrative, you've got the makings of either a crackpot manifesto or an intriguing work of scientific speculation. Thankfully, the aviation editor for Jane's Defence Weekly delivers the latter. Cook's spirited if sometimes improbable tale turns on the question of whether human beings might be able to harness and thereby defy gravity in order to do such things as travel through time and cross the galaxy at the speed of light. It's theoretically possible, Cook suggests; for at least a couple of generations, some physicists have suspected that the universe conceals a fifth dimension-hyperspace-in which gravity as we understand it no longer applies. Getting to that point, of course, presents plenty of practical problems, but that has not discouraged the efforts of engineers, from the Nazi scientists who gave the world jet fighters and the V2 rocket to some of NASA's best and brightest. Though much of his argument involves questionable evidence and a cool-to-cold trail, Cook examines Nazi efforts to develop "flying discs" (the disc, it appears, is the ideal shape for an antigravity aircraft) and considers the possibility that after WWII, American engineers might have whisked a few Nazi documents (or, for that matter, scientists) off to their labs to continue the experiments. If so, he speculates, then the UFOs that began to pop up in Air Force and police reports in great numbers beginning in the late 1940s might in fact have been antigravitational aircraft making test flights. Cook, who clearly knows his technology, is fully aware that he sometimes treads in the territory of what scientists call "The Legend"; he cautions that no single explanation can satisfactorily account for all the UFO sightings on record. Hardheaded rationalists will likely take this with a shakerful of salt, but technology enthusiasts, aviation buffs, and UFO watchers should find it fascinating. (Kirkus Reviews)

Product Description
The nuclear bomb programme was the culmination of a huge, expensive research development project, so secret that even days before the explosion of the first bomb many people said it was impossible. But what if, at the same time, America had discovered another strand of technology that was even more powerful than atomic science, a weapon so powerful it needs no fuel to fly at 17000 miles per second? Defence journalist Nick Cook reveals a 50-year conspiracy to surpress a technology based on anti-gravity, way ahead of its time. Gravity control: technology that can cancel out the weight of objects or be transformed into engines that produce energy from nothing, promising safe, pollution-free power, limitless propulsion - and weapons potential, The US aerospace and defence industry announced in 1956 that it was on the brink of a great scientific discovery and that the breakthrough would come before the decade was out. But it never happened; the revolution died before it had begun. That was the official version of events. The truth, however, Cook maintains, is very different, and this book traces his 10-year investigation to prove that America cracked the gravity code and classified the technology at unheard of security levels. In his pursuit of the truth, he went to the heart of US aerospace development - a regime so secret it does not officially exist. Cook's trail took him eventually to Germany, searching out a repository of technical secrets buried 50 years earlier by the Nazis. There, among a cache of unofficial projects run by the SS and hidden by the Holocaust, he learned the secret of Zero Point.