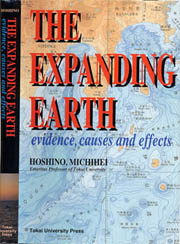 ln this book the author explains his ideas about the significance of basaltic underplating beneath the ocean floor which he believes was the cause of a remarkable rise in sea level and, which simultaneously and by the same means, led to continental uplift by basaltic underplating between the granitic crust and the upper mantle.

In Part 2, the author describes the geological evidence for changes in sea level based on studies of the continental shelf, the continental slope, oceanic trenches, guyots, coral reefs, landbridges and rift valleys.

In Part, 3 he describes his opinion on the origin of the upper layer of the Earth by the accumulation of Ca-rich (eucrite) chondrites and Mg-rich (enstatite) chondrites and subsequent history of the Earth's crust. From the enstatite chondrites, which made up the upper layers of the primordial Earth, came the atmospheric gases, sea water, granitic rocks, the Mg rich basalts and residual peridotites which made the upper-most mantle.

The author calls this stage the Granitic Stage and it corresponds with the Archean Era. Subsequently, the primordial Earth's surface was uplifted due to underplating by the layered igneous rocks and the uplifted platforms were subjected to intense denudation leading to broad peneplains. These peneplains (platforms) were transmuted into the deep ocean basins and major sedimentary basins. The furrows between the uplifted platforms became the geosynclines. This stage of evolution, (the Proterozoic and Plaeozoic Eras) the author has called the Transitional Stage.

The third stage, (the Mesozoic and Cenozoic Eras), of the history of the Earth's crust was characterised by marked basaltic underplating, the author's Basaltic Stage. In this stage the platforms which were less continentalised were uplifted as broad platforms; high mountains were created from mobile belts and.left behind,'i.e. non-raised, furrows and basins were left as rift valleys, oceanic trenches and intermontane basins. The basaltic underplating of the Basaltic Stage was also the cause of a marked rise in sea-level.

The history of the Earth's crust is a nonreversible process and in the Basaltic Stage the tectonic energy and the high heat source of the basaltic magma is the essential driving force for igneous activity, metamorphism, sedimentation, tectonism and sea-level change. Furthermore, the distribution and development of the modern Earth resulted from it.