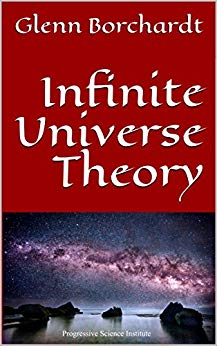 Infinite Universe Theory presents the ultimate alternative to the Big Bang Theory and the common assumption that the universe had an origin. Author Glenn Borchardt starts with photos of the “elderly” galaxies at the observational edge of the universe. These contradict the current belief that the universe should have increasingly younger objects as we view greater distances. He restates the fundamental assumptions that must underlie the new paradigm. Notably, by assuming infinity he is able to adapt classical mechanics to “neomechanics” and its insistence that phenomena are strictly the result of matter in motion. He shows in detail how misinterpretations of relativity have aided current flights of fancy more in tune with religion than science.

Borchardt demonstrates why only Infinite Universe Theory can provide answers to questions untouched by currently regressive physics and cosmogony. His new modification of gravitation theory gets us closer to its physical cause without calling upon attraction or curved spacetime or “immaterial fields.”

This is the book for you if you have doubts about the universe exploding out of nothing and expanding in all directions at once, that the universe has more than three dimensions, or that light is a massless wave-particle that defies the Second Law of Thermodynamics. Borchardt has put forth a solid case for an Infinite Universe that extends in all directions and exists everywhere and for all time.

“What a great read! Thanks so much for a book full of great ideas. I love the Q&A format; it’s very satisfying to have good answers to clearly stated questions.” -Rick Dutkiewicz

“A radical, daring, and innovative demolition of regressive physics, from the creation of ‘something out of nothing’ to the ‘God Particle.’” -William Westmiller

\"Glenn Borchardt\'s book uses the hammer of Infinity to explain and destroy the junk theories that plague \'Official\' physics today. This is a book that should be used in college courses, to give students a basic understanding of how physics is done. Physics has \'gone off the rails\' for a century and it is books like Borchardt\'s that will return physics from its current unscientific and anti-materialist base and back on to a scientific and materialist road.\" -Mike Gimbel

“What a fascinating read!” -Juan Calsiano