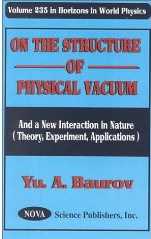 On the Structure of Physical Vacuum and a New Interaction in Nature (Theory, Experiment and Applications) (Buy Now)

Yuri A. Baurov
In the book, an unconventional physical model of creation of the observed physical space from a finite set of special discrete objects, byuons is presented. The global space anisotropy associated with a cosmological vectorial potential appearing in the definition of byuons, as well as a new interaction due to this anisotropy, are predicted. Results of an experimental investigation of the proposed new interaction are given. A new method of power production based on the new interaction, as well as a new principle of motion of objects in nature with the use of physical space as a support medium, are advanced. The book is intended for the general reading public, physicists (theorists and experimenters), astrophysicists, engineers (specialists in space technology and power engineering), and physical students.