A thought-provoking insight into the evolution of cosmology for undergraduate students and general readers, this book shows that the mystery of the origin of the universe is far from being solved. Cosmology has advanced over time through observational evidence as well as a lot of speculation. In this historical approach, the authors argue that the speculative element has become a dominant part of modern cosmology. They show how assumptions have been made and portrayed as confirmed facts. This unique book gives not only a critical assessment of the big bang theory, but presents a host of anomalous observations, and puts forward an alternative, controversial theory on the origin of the universe. A non-mathematical account, it contains analogies from everyday life so that readers can understand the concepts easily and follow the arguments presented. 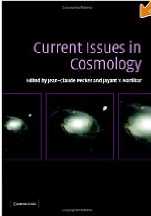 What are the current ideas describing the large scale structure of the universe? How do they relate to the observed facts? This book looks at both the strengths and weaknesses of the current big bang model in explaining certain puzzling data. It arises from an international conference held at the College de France, Paris in June 2004, which brought together many of the world's leading players in cosmology. In addition to presenting individual talks, the proceedings of the resulting discussions are also recorded. Giving a comprehensive coverage of the expanding field of cosmology, this text will be valuable for graduate students and researchers in cosmology and theoretical astrophysics.

View count: 1
Buy it now
A Different Approach to Cosmology: From a Static Universe through the Big Bang towards Reality
by Geoffrey Ronald Burbidge, Jayant Vishnu Narlikar

For modern readers, raised on 1984 and Kurt Cobain, anything that smacks of the mainstream arouses suspicion. So after every cosmology article in Scientific American, editors brace for an onslaught of letters demanding that alternatives to conventional theories be given their due. This book describes the best-developed such alternative: the quasi-steady-state theory, the latest incarnation of the steady-state theory that Fred Hoyle first devised in 1948. It argues that the famous cosmic microwave background radiation is diffuse starlight rather than the afterglow of a hot big bang; that stars synthesized the chemical elements usually attributed to the bang; and that matter is continuously created and ejected from the cores of galaxies. The heterodoxy is seductive. But in a commentary in the April 1999 issue of Physics Today, cosmologist Andreas Albrecht outlined the failings of the theory and the tests it would need to pass before being taken seriously by most cosmologists. If nothing else, a critical reading of this book shows that "mainstream" isn't such a dirty word after all. Science is tricky. Seemingly plausible ideas can have subtle flaws, and it takes a collective effort of problem solving to find them out. --This text refers to an out of print or unavailable edition of this title.

Review
"Professor Sir Fred Hoyle, Britain's greatest living astrophysicist...launches his most comprehensive attack against the Big Bang theory, in a book with the archly subversive title A Different Approach to Cosmology...when Hoyle makes a cosmic pronouncement, it is invariably worth hearing...Together with two other respected astrophysicists, Hoyle systematically reviews the evidence for the Big Bang theory, and gives it a good kicking...it's hard not to be impressed with the audacity of the demolition job...I can only hope that I possess one-thousandth of Hoyles' fighting spirit when I, like him, have reached my 85th year." The Sunday Telegraph

"The writing style is lively and personal, and the scientific arguments are written in such a way as to be accessible to upper-division undergraduate students in physics and astrophysics. The book is very well referenced and illustrated with suitable and approproate illustrations. Recommended for upper-division undergraduates, graduate students, and two-year technical program students." Choice

"This is a fascinating book, expressing the views of three scientists who choose to go against the conventional cosmological wisdom. It is extremely important for such skepticism to exist and for such books to be written." Physics Today

"The book is a serious and professional contribution to scientific cosmology." Sky & Telescope

"Throughout the last few decades, Fred Hoyle, Geoffrey Burbidge, and Jayant Narlikar have done the cosmology community a great service by developing and defending a serious alternative to Big Bang models of cosmic origins. A Different Approach to Cosmology is a summary of their work...by elucidating one of the hot Big Bang's competitors, the authors provide a good educational exercise for any graduate student interested in fundamental cosmology." Science 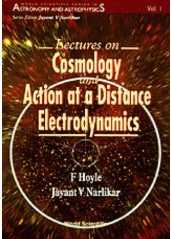 View count: 1
Buy it now
Lectures on Cosmology and Action at a Distance Electrodynamics (World Scientific Series in Astronomy and Astrophysics, Vol 1)
by Jayant Vishnu Narlikar

This book describes the subject of electrodynamics at classical as well as quantum level, developed as an interaction at a distance. Thus it has electric charges interacting with one another directly and not through the medium of a field. In general such an interaction travels forward and backward in time symmetrically, thus apparently violating the principle of causality. It turns out, however, that in such a description the cosmological boundary conditions become very important. The theory therefore works only in a cosmology with the right boundary conditions; but when it does work it is free from the divergences that plague a quantum field theory.

View count: 1
Buy it now
An Introduction to Cosmology
by Jayant Vishnu Narlikar


"This valuable graduate-student text is comprehensible and has many problems for students to solve." Sky and Telescope

'... the quality of the text is at the high level the author's reputation would suggest ??'. Astronomy & Geophysics

'... a really excellent set of lecture notes which add up to a very accessible text on what is often misrepresented as an extremely esoteric subject ... due to its clarity, straight-forward style, and scope, this book has long been a favourite of students.' Dominic Clancy, The Observatory

'The student can gain some early practice by looking at the examples presented here. They will also obtain a rigorous overview of the present observational data that will need to be incorporated into any model that wishes to displace present big bang cosmology.' Contemporary Physics