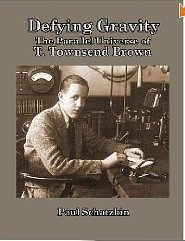 Websites: www.ttbrown.com/book/index.html
An underground "Cult Classic" -- Here is the raw, unexpurgated, all-in, "kitchen sink" version of the authorized biography of Thomas Townsend Brown. Genius inventor, gentleman spy and mystic warrior, Brown is the enigmatic scientist who demonstrated the link between electricity and gravity in the 1920s, before disappearing behind a curtain of classified military research and covert intelligence operations after World War II. This is the first-ever comprehensive attempt to follow Brown's bizarre odyssey, and was originally written online from 2005-2008 with the aid of "reliable sources" with first-hand knowledge of Brown's covert activities.

Unlike Alice's Adventures In Wonderland, this is not a fairy tale, though at times it seems like one. So perhaps it is fitting to begin by saying:

But that's about all we really know. Beyond that, the man is a ghost, a zephyr, a myth.

"The Universe is filled with magical things," wrote science fiction pioneer Eden Phillpotts, "patiently waiting for your wits to grow sharper." All the arrows in Townsend Brown's life point to just such a magical cosmos. Like stones hurled across the surface of a mountain lake in the early morning dew, the story points in the life of Townsend Brown all skip across the surface of our consciousness and disappear into a shroud of mist. But if we focus our vision just... so, and look into the mist with fresh eyes, we can see where the stone goes, and see the ripples from where it splashes. 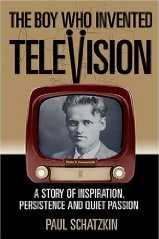 View count: 1
Buy it now
The Boy Who Invented Television: A Story Of Inspiration, Persistence, And Quiet Passion
by Paul Schatzkin

At the tender age of 14 and with very little previous knowledge of electronics, Philo T. Farnsworth brought together the building blocks for the television medium, which turned 75 on September 7. Schatzkin, a Farnsworth scholar, focuses on the boy genius's life story, showing us who and what influenced him. Drawing on 20 years of research (including interviews with Farnsworth's family and confidants), he details the funding of various television experiments, patent protection efforts, and technological developments. This joins a number of other recent biographies on Farnsworth, most notably Evan Schwartz's The Last Lone Inventor: A Tale of Genius, Deceit, and the Birth of Television, which focuses on his battle with David Sarnoff over the organization of television, and Donald Godfrey's more general Philo T. Farnsworth: The Father of Television. On its own, Schatzkin's book is a great biography of a gifted inventor and of value to anyone seeking an accessible tour of Farnsworth's life and challenges. Recommended, particularly for academic libraries with broadcasting and media collections. - David M. Lisa, Wayne P.L., NJ
Copyright 2002 Reed Business Information, Inc. --This text refers to an out of print or unavailable edition of this title.