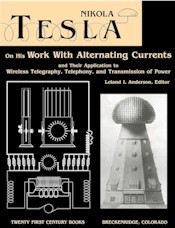 View count: 1
Buy it now
Nikola Tesla On His Work With Alternating Currents and Their Application to Wireless Telegraphy, Telephony, and Transmission of Power: An Extended Interview (Tesla Presents Series, Part 1)
by Nikola Tesla, Leland I. Anderson

This is the transcript of an extended three day interview of Nikola Tesla conducted by his legal counsel in 1916 in preparation for expert testimony in impending radio patent cases.  In an account that was never intended for publication, Tesla describes his pioneering investigations into the nature of alternating currents as applied to wireless transmission.  In a style uniquely his own, he carefully traces his work from the first high frequency alternators that were constructed at his Grand Street laboratory in New York City, and their associated tuned circuits through the establishment of his huge broadcasting facility, the mighty Wardenclyffe Plant, located at Shoreham, Long Island.  Among the variety of topics discussed are: high frequency alternators, experiments with wireless telegraphy and telephony, mechanical and electrical oscillators, the Colorado experiments, theory and technique of energy transmission, the Long Island plant, and arrangements for receiving.  The previously untold story found within the pages of this remarkable book has been described by the prominent Tesla researcher James Corum as a "veritable Rosetta stone" for tracing the technical thoughts of one of our most distinguished engineering scientists. 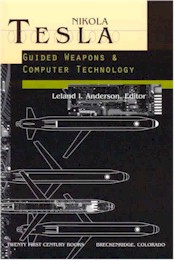 In this, the third book of the Tesla Presents Series, engineer-historian Leland Anderson provides the transcript of the 1902 U.S. Patent Interference investigation concerning Tesla's System of Signaling.  The document, "Nikola Tesla vs. Reginald A. Fessenden," which is no longer on file at the U.S. Patent Office, contains Tesla's own depositions as well as those of his closest and most trusted associates, George Scherff and Fritz Lowenstein.  Included is material on the history of radio-controlled devices, the first practical form of these being Tesla's radio-controlled "telautomaton" ? an operational boat first demonstrated to the public at Madison Square Garden in 1898. In addition to describing Tesla's "individualization" techniques for obtaining secure noninterferable radio communications?the patent is today recognized as the fundamental AND logic gate, a critical element of every digital computer?the interference record also reveals that essential features of the spread-spectrum telecommunications techniques known as frequency-hopping and frequency-division multiplexing have their roots in the resulting patents. Furthermore, there are new disclosures by Tesla on the operation of his large high voltage radio-frequency oscillators at both the Houston Street laboratory and the Colorado experimental station. Rarely in the history of science do we encounter such opportunities to gain deep insight into the fundamental ideas and concepts of an esteemed scientist/inventor. 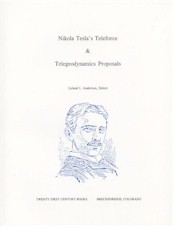 In the 1930s the unorthodox inventor Nikola Tesla announced to the world a pair of novel inventions.  The first was "teleforce," a particle-beam projector which Tesla intended to be used as an instrument of national defense. A year later, in 1935, Tesla claimed a method of transmitting mechanical energy with minimal loss over any terrestrial distance, providing a new means of communication and a technique for the location of subterranean mineral deposits. He called this system for mechanical power transmission "telegeodynamics." Here, these two important papers, hidden for more than 60 years, are presented for the first time. The underlying principles behind teleforce and telegeodynamics are fully addressed.  In addition to copies of the original documents, typed on Tesla's official stationery, this work also includes two Reader's Aid sections providing guidance through the more technical aspects of each paper.  The actual texts are followed by Commentary sections which provide historical background and functional explanations of the two devices.  Significant newspaper articles and headline accounts are provided to document the first mention of these proposals. A large Appendix provides a wealth of related material and background information, followed by a Bibliography section and Index. 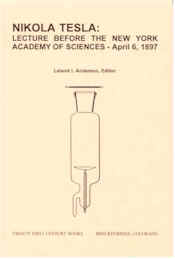 View count: 1
Buy it now
Nikola Tesla Lecture Before the New York Academy of Sciences - April 6, 1897: The Streams of Lenard and Roentgen and Novel Apparatus for Their Production (Tesla Presents Series, Part 2)
by Nikola Tesla, Leland I. Anderson

Following Nikola Tesla On His Work With Alternating Currents. This book is the second in the four part Tesla Presents series containing previously unavailable material on the pioneering work of Nikola Tesla in field of radio frequency electrical engineering. While first delivered under the title "On the Streams of Lenard and Roentgen with Novel Apparatus for Their Use" the information presented in the lecture goes far beyond this topic. In addition to his opening remarks on X-ray discovery, a major portion of Tesla's commentary deals with the high power radio-frequency resonant power supplies of his own design, used in conjunction with his work. There are also clear descriptions of electro-mechanical stroboscopic instruments that Tesla designed for the measurement of frequency and phase.  Other topics include wireless receiving methods and the genesis of Tesla's 1937 particle beam tube.  During the talk Tesla had displayed approximately 120 drawings of specially constructed vacuum tubes, many being of the Lenard type and also the single-electrode type of his own design.  Among the drawings are tubes used in his wireless communications experiments. Enhanced photographs of these images are among the 32 illustrations which fill out this fine addition to the Tesla cannon. 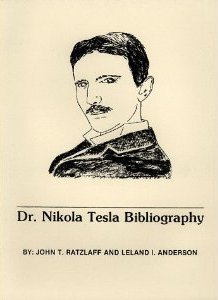 First published in 1979, this is the second printing of an exhaustive annotated bibliography of writings by and about the inventor Nikola Tesla (1856-1943). The period covered is from 1884 through 1978 with approximately 3,000 citations arranged in chronological order. In compiling this edition, all earlier bibliographical efforts were merged, with both North American and European sources being cited. In addition to searching periodical directories and newspaper indexes, complete runs of 23 serials were examined for content; morgue files were examined for unindexed newspapers; Tesla's estate papers were examined for reference to obscure published articles; clipping files in major institutional and public libraries were examined. The end result is a major work that to this day serves as an aid to the user in following the sequence of Tesla's life, scientific discoveries, and accomplishments.

"One of the best bibliographies I have seen on anyone... Every Tesla buff should have a copy... If anyone had doubts about Tesla's contribution to radio and electricity...this should satisfy them.... -- Antique Wireless Association Bulletin, December 1980 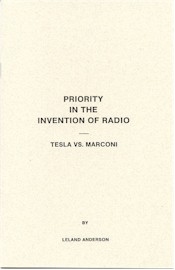 View count: 1
Buy it now
Priority in the Invention of Radio - Tesla vs. Marconi
by Leland I. Anderson

On June 21, 1943 the Supreme Court of the United States held the broad claims of Guglielmo Marconi's patent for improvements in apparatus for wireless telegraphy to be invalid. First written for publication by the Antique Wireless Association, this monograph shows how the nation's high court arrived at its decision. It provides an answer to the continuing argument regarding the popular misconception that Marconi invented radio. 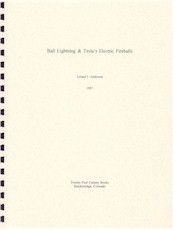 Websites: www.tfcbooks.com/mall/more/490tef.htm
Practically everyone has heard stories about this unusual electrical phenomenon.  While they have mystified people for hundreds of years, they can now be produced at will and researchers are beginning to zero in on their true nature.  This piece provides some background on the subject plus an overview of research which has resulted a few theories of the physics behind their creation.  Included is the previously unpublished Chapter 34 of Prodigal Genius titled "Tesla Tries to Prevent World War II.