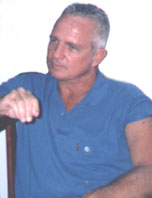 Wladimir Guglinski was born in Goi?nia, Goias, Brazil and graduated in mechanical engineering in 1973 from the Engineering School UFMG-Belo Horizonte.

He worked from 1974 to 1990 as a contracted industrial engineer. In 1991, he abandoned this and started his own pre-fabricated cement block company in Mirai, Minas Gerais and writes in his spare time.

In His Own Words

I am working in the script of a film to be made by The Telesio Galilei Academy, on the Quantum Ring Theory (the film will show several models of QRT in 3D animation).

Telesio Galilei Academy also will publish my book THE MISSED U-TURN, THE DUEL HEISENBERG VERSUS SCHRODINGER, in which it is explained the fundamental ideas of QRT for the layman (the text is now submitted to review, because of my bad English).