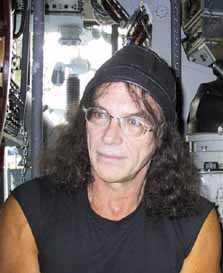 "The Hutchison Effect occurs as the result of radio wave interferences in a zone of spatial volume encompassed by high voltage sources, usually a Van de Graff generator, and two or more Tesla coils.

"The effects produced include levitation of heavy objects, fusion of dissimilar materials such as metal and wood (exactly as portrayed in the movie, "The Philadelphia Experiment"), the anomalous heating of metals without burning adjacent material, spontaneous fracturing of metals (which separate by sliding in a sideways fashion), and both temporary and permanent changes in the crystalline structure and physical properties of metals." - Mark Solis