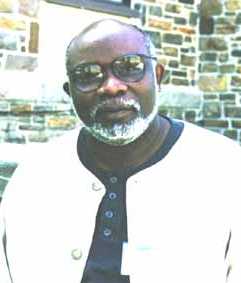 One of six children of Sallie and Leonard Gill, Tepper L. Gill was born in 1941 in Selma, Alabama.  Soon after his birth, the family moved to Detroit, Michigan, where the late Leonard Gill became a long-time employee of the Ford  Motor Company and Sallie Gill owned and operated a beauty salon.

For Gill, the passion for mathematics would take a circuitous route--one marked with an early waning interest in academics.  One memory that continues to point to a turning point in his young life was an encounter in elementary school when it was discovered that his vision was preventing him from seeing the writing on the board.  Initially a good student, the young Gill complained to his elementary school teacher that he was unable to see the blackboard.  Not knowing at the time that his vision was impaired, the teacher ignored his complaint.  Sallie Gill, his mother, took the complaint seriously, had him examined and purchased the glasses and the proud student walked into class wearing the much-needed glasses.  However, it was the lack of acknowledgment by the teacher that created a lasting impression on the young Gill.  Never once did she acknowledge that she had erred in not taking his complaints seriously.  It is this incident that the accomplished mathematician remembers as contributing to his lack of interest in school.  The good student became a mediocre one.

Recognition, however, came from another source.  Outside of school, Gill showed promise as a gifted and talented singer and musician.  Using what would later become a characteristic of his innovative spirit, Gill established his own quartet while in high school and gained popularity among teachers and students.  It was an area in which he found encouragement and pleasure.  One source of that encouragement and inspiration had been his ninth grade music teacher, George Shirley.  Shirley later went on to become a well-known singer with the New York Metropolitan Opera.

Gill's music career might have taking him further had it not been for his still dormant academic prowess.  High school teachers wanted to nominate him for a scholarship in voice, but because his academic record was lackluster, he lost the opportunity.  With the cloud of bad grades and the downturn in the automobile industry,  a factory job was not even a possibility for him upon graduation.  When an opportunity came along to work at a race track, Gill, along with his brother Gus, took it and left Detroit to take care of horses.  At least with this job, Gill and his brother were able to move their horizons beyond Detroit and travel along with the race track entourage.

While horse racing had its glamorous side, it also had its dark side for these young men.  Money was scarce, they were young, discrimination was rampant, horse racing towns were by and large still in the era of Jim Crow.  The Gill brothers --after a few mishaps--decided that maybe another try at academics might offer some better choices.  They both returned to Detroit, enrolled in night school and began preparing for entrance into college.  While Gill studied mathematics, his brother Gus  went on to become a medical doctor, after gradating from the Michigan School of Medicine.

Gill, still interested in music, attended night school and took college preparatory courses, successfully completing three years of algebra and geometry in less than a year, while working full time and studying piano and voice at the Detroit Conservatory of Music.  More intentional about his studies and determined to do well, he succeeded in gaining entrance into the Detroit Institute of Technology (DIT), where he studied chemistry, English and social science.

As his academic life began to fall into place, so did his understanding of his own abilities and strengths.  It was here that he began to gain recognition as a gifted student in mathematics.  Two characteristics of the field of mathematics sparked Gill's budding analytical passions:  the sincerity of the professors who encouraged him to persevere and the objectivity with which the assessment of abilities played out in the classroom.  For Gill, mathematics became a place where he could both be himself as an African American and where the young man could uncompromisingly mature intellectually.  Neither his culture nor his manhood would be impugned by this discipline.

The road from Detroit Institute for Technology to a college degree was non-stop.  Gill transferred to Wayne State University in Detroit, Michigan where he received his BS in Mathematics and Physics in 1966.  Graduate students and faculty members along the way had impressed him with the level of passion that they felt for mathematics; it was not unlike what he had felt for music.  People like a graduate student, Hanz Herta, who taught calculus and the late Professor Al Barucha-Reid, who later would become Gill's dissertation adviser, displayed what for Gill was a heretofore unknown intensity and energy in the pursuit of mathematics.  He would later immerse himself in the field with a comparable zeal.

The outside world also had an impact on Gill's new found love.  The Russian space satellite, Sputnik, had been launched in 1957 and America was catapulted into the space race offering talented students scholarships and opportunities to gain experience and advanced degrees.  Gill was one of those students.  He took a job with the US Army, as a civilian employee in the Science and Engineering Center, receiving benefits that included financial support to study engineering mechanics at night at Wayne State.  The army position offered a chance for Gill to gain additional insight into the applications to which mathematics and physics could be used. Physics was a method to test mathematical ideas.  Using his evolving understanding of the three areas of physics, mathematics, and electrical engineering, Gill cultivated multi-disciplinary interests which included random vibrations and elasticity and probability theory.  In 1969, he was one step closer to a terminal degree when he completed a MS in Applied Mathematics.

With a grant from the National Science Foundation (NSF), Gill left the Army and began course work on his doctorate at Wayne State.  Seasoned as a researcher and applied mathematician, Gill would now take on the challenge of university teaching.  It would be a prelude to a new and burgeoning passion--teaching young minds to cultivate a love for science.

Under the direction of his dissertation advisor, Al Barucha-Reid, Gill earned at Ph.D. in Mathematics in 1974 from Wayne State University.  His dissertation was entitled "Tensor Products of Contraction Semigroups on Hilbert Spaces."

Gill's reputation as an up-and-coming leader did not go unnoticed.  Prior to completing his dissertation, he was recruited to lead the city of Detroit's Economic Development Corporation (EDC).  As Vice President for Planning and Development (1971-1974), he put his sharpened analytical abilities to work on developing opportunities for entrepreneurs and minority businesses committed to helping the city revamp its economic potential.  After completing his doctorate and just before joining the faculty of Howard University, he helped start the Organization for Applied Science in Society and served as Vice President (1974-1976).  This was a private non-profit company devoted to the use of operations research and information systems technology in improving public services.  He lead a major effort to modernize public housing management throughout the midwest.

Gill's commitment to the community and his love of mathematical research would be themes throughout his career.  Even as he accepted an offer to become an Assistant Professor at Howard University, in Washington, DC, in 1976, he continued to explore ways to expand economic options and opportunities for minorities in science and in the community.  At Howard, he used his considerable background to found and direct the Howard University Computational Science and Engineering Research Center (1990-1996).  Gill brought the first Super computer to Howard University through his partnership with the University of Minnesota and the Army High Performance Computing Research Center.  For the period of time that Gill directed the center, he brought into the University over $100 million in research grants and contracts, which provided financial support for over 40 faculty members, senior research scientists, and young Ph.D. research fellows.  In addition, nearly a hundred graduate and undergraduate students were trained and supported by the center.

Well-respected in the academic community because of his research, Gill has been a Visiting Professor and Chancellor's Research Fellow in Mathematics at the University of California, Berkeley (1981-1982); a Benedict Distinguished Visiting Professor at Carleton College in Northfield, Minnesota (Fall 1985); and a Visiting Professor for the department of Physics at Virginia Polytechnic Institute, Blacksburg, Virginia (1986).

At Howard University, Gill moved through the academy, starting as an Assistant Professor in 1976.  He was promoted to Associate Professor in 1981 and Professor in 1988.  In 1987 he became the Chairman of the Department of Electrical Engineering.  He has a joint appointment in the Departments of Electrical Engineering and Mathematics.  He is also a Professor for the Division of Theoretical Physics at the Instituto per la Ricerca de Base in Italy.  He is an editor of the HADRONIC JOURNAL, a periodical with a primary focus in theoretical and mathematical physics.

In 1997, Gill was a Member in the School of Mathematics of the Institute for Advanced Studies, Princeton, New Jersey, where he investigated a new implementation of the special theory of relativity which does not require the use of time as a fourth coordinate.  His current research interests include relativistic quantum mechanics, classical electrodynamics, non linear dynamical systems and probability theory.

Still a lover of music, Gill confines his singing to the church.  He is the father of three children--Tepper, Jennette and Dylan, and the husband of the former LaVerne McCain.