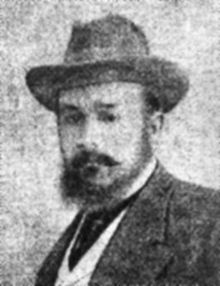 One of the early inventors of the helicopter, George De Bothezat wrote a book critical of Einstein?s Theory of Relativity.  In his book, Back To Newton, Bothezat gave a critical discussion of the three great cognitive issues, infinity, absolute time, and absolute motion. It includes a rigorous proof of the fallacy of Einstein?s theories of relativity.

Coinventor with Ivan Jerome of a "verticle flying machine" http://www.aviastar.org/helicopters_eng/bothezat.php called the "De Bothezat".  His early "quadrotor" http://en.wikipedia.org/wiki/Quadrotor led to the development of the helicopter.

"Gheorghe Botezat either doctor George, Geogrij, Georges A. de Bothezat or Georg A. Botezat, Botezatu, was born in Iasi i.e. Jassy in Romania 1883 or 1882 - died in Dayton, Ohio in USA 1940. Botezat learnt in Sereth, after in Sorbona and was a doctor in field of aviation; a Russian aeronautical engineer and mathematician; professor of the Petrograd Polytechnic Institute in the beginning of the First world war; worked for DEKA in Petrograd 1916 - 1917 and next he stayed in Iasi at the turn of 1918; wrote (1918) letter and report "General Theory of the Screw" (air-screw i.e. propeller of an aircraft); after he wrote off to Subcommittee on Buildings, Laboratories and Equipments in Feb. 1919 and (? by http://avia.russian.ee/vertigo/bothezat-r.html ) the US Army Air Corps awarded a contract in January 1921 to Dr. George de Bothezat and Ivan Jerome (i.e. Eremeeff, Jeromiejew or Jerome - a millionaire inventor from Long Island and owner of the Massapequa Farmers Market, the 59-year old Jerome was arrested in 1955, freed on $100,000 bond, he jumped bail and disappeared; there were reports he had been seen everywhere from Russia to South America, but he was never found; ? by http://www.newsday.com/extras/lihistory) to develop a vertical flight machine; this helicopter, designated the Engineering Division H-1 and designed by George De Bothezat and Ivan (Eremeeff) Jerome, made its first public flight on December 18, 1922; George de Bothezat?s Army Helicopter Number 1 nicknamed "The Flying Octopus", possessed 1 x the 180 hp Le Rhone radial engine (Rhone 134 kW); a helicopter of ex-russian i.e. really moldavian or Romanian G. A. Botezat has taken off with 2 men aboard at 1.2 meters of altitude on 19 January 1923 but the US Air Force was more interested in autogyros and blocked funds to de Bothezat." -