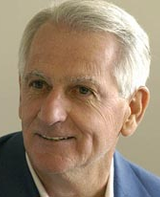 John S. Kanzius was an American inventor, radio and TV engineer, one-time station owner and ham radio operator (Call Sign K3TUP) from Erie, Pennsylvania. He invented a method that has the potential to treat virtually all forms of cancer, with no side effects, and without the need for surgery or medication.[2][3][4] He also demonstrated a device that generated flammable hydrogen-containing gas from salt-water-solution by the use of radiowaves. In the media this was dubbed "burning salt water". Both effects involve the use of his radio frequency transmitter.

Kanzius, an autodidact, stated that he was motivated to research the subject of cancer treatment by his own experiences undergoing chemotherapy for treatment of non-Hodgkin's lymphoma. - Wikipedia

He also discovered a process to burn salt water.