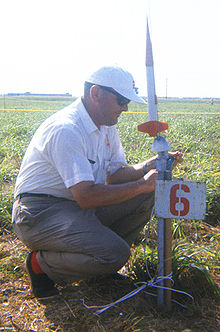 George Harry Stine was one of the founding figures of model rocketry, a science and technology writer, and (under the name Lee Correy) a science fiction author.

Stine grew up in Colorado Springs and attended the University of Colorado in Boulder. Upon his graduation he went to work at White Sands Proving Grounds, first as a civilian scientist and then, from 1955?1957, at the U.S. Naval Ordnance Missile Test Facility as head of the Range Operations Division.

After White Sands, Stine was employed at several other aerospace companies, finally ending up at Martin working on the Titan project. Back in his days at White Sands he had handled inquiries from young people concerning rockets, and early in 1957 he wrote an article for Mechanics Illustrated about rocket safety. Shortly thereafter he received a letter from Orville Carlisle, who had begun making small models and, more importantly, replaceable solid fuel engines to power them. Stine was impressed with the samples that Carlisle had sent him, and wrote a cover article for the October MI issue about them. After the Martin firing, he contacted Carlisle and the two of them formed Model Missiles Inc., the first manufacturer of model rockets and their engines. Stine also founded the National Association of Rocketry (initially called the Model Missile Association) and wrote the safety code which became its centerpiece; he served as its president until the late 1960s.

Stine authored numerous books, including the controversial On The Frontiers of Science (1985), which described how to build a number of devices that appear to contradict the laws of physics or mechanics, and that, in his words, "work for some people" but "sometimes...don't work for everyone." He also took an interest in Norman Dean's "Dean Drive", alleged to be a reactionless drive.